Introduction:
It is a direct Patent Infringement case, claimant “Data card Corporation” (Datacard) sued Eagle technologies for infringing its couple of patents: UK 1458572 (‘572) and UK 1534530 (‘530) and also couple of trademarks: UK 1399698 (‘698) and UK 1399699 (‘699). When I was searching case laws to understand the degree of obviousness, especially in the field of mechanical engineering, from English courts I came across this wonderful case and hence thought of blogging on the same. In Part – I, I have decided to pen down the insight arguments between the claimant and the defendant and also to summarize the judgment for the ‘530 Patent. Although, Eagle accepts the infringement of its products, it questions the validity of the “530 patent. The case principally involves thermal transfer printing.

‘530 Patent:-
The ‘530 patent entitled “Supply items for printers and the like, and method of loading supply items” has a priority date of 31st July 2002. The invention relates to printers, laminators and other equipment to produce data bearing identification. In particular, the invention relates to supply items (Ribbon, webs that carry laminate patches, cleaning tape, holographic overlays, and other exhaustible web materials) in such equipment and to a method for facilitating the loading of the supply item into the equipment.

The patent describes a supply item and a carrier that are modified to facilitate loading of the supply item onto the carrier in the proper orientation, and the carrier can be more easily loaded into the production equipment in the correct orientation. 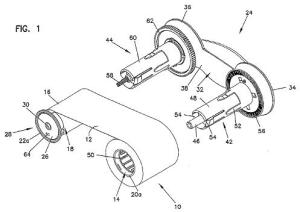 The inventive concept of claim 1, after amendment, explains that one end of one of the cylinders of a supply item has a different geometry to that of the other three ends so that the supply item can be correctly loaded onto a carrier having appropriately-shaped spindles.

The Fargo Pro-L printer has four hubs, three of which are large and one of which is smaller. The ribbon is supplied on two cylinders. One of the ends of the cylinders is different to the other three ends in that it is fitted with a closely fitting circular insert. This insert has an aperture which is concentric with the circumference of the insert and the inner circumference of the cylinder. The insert contains a number of metal pins disposed in a circle concentric with the aperture. The aperture enables the end of the cylinder with the insert to fit onto the smaller of the four hubs, but is not large enough to fit properly onto the other three hubs.

Eagle contends that there is a disadvantage with the method of loading the ribbon used in the Fargo Pro-L as it was fiddly to fit the cylinders onto the four hubs inside the printer. A well-known and obvious alternative method of loading a ribbon in 2002 was direct loading onto two spindles in the printer. Once the skilled team decided to adopt the direct loading onto spindles approach, it would have been immediately apparent to them that the cylinders would need to have ribs on the inside so as to enable the spindles to drive the cylinders. At that point they would have arrived at a supply item within amended claim 1, because the geometry of the ends of the cylinders would be capable of limiting loading onto spindles on an appropriate carrier.

Judge dismissed Datacard five arguments that were crucial in determining the obviousness:
First, DataCard argues that the skilled team would have no motive to change from the hub design of the Fargo Pro-L. Judge did not accept this arg. and said that the absence of motive is not conclusive Changing from one well-known ribbon loading arrangement to another one is not something that requires a specific motive, because they are technically obvious alternatives to each other. Furthermore, in the present case there would be a motive, namely the desire for a less fiddly method of loading the ribbon.

Second, the skilled team would have motive not to change it. Judge refused this arg. and said by changing the loading method from hubs to spindles would not necessitate changing the insert, nor prevent the ribbon being identified by means of a Hall Effect sensor.

Third, if the skilled team decided to change from hubs to spindles, it would be into a complete re-design of at least the ribbon-loading aspects of the machine. Judge refused this point by saying if differential geometry of the ends of the cylinders in terms of preventing error loading when combined with suitable hubs would be apparent to the skilled team, then it would not take invention to appreciate that precisely the same advantage could be obtained when replacing hubs driven by means of notches with spindles driven by ribs.

Fourth, judge, for the above reasons, refused to accept Expert witness evidence that the two systems involved a different constructional principle, and therefore a wholesale re-design would be required.

Obviousness over Brother (US Patent No. 6,257,780):
Judge is of the opinion that the arguments in relation to Brother are similar to those in relation to Fargo Pro-L. So far as amended claim 1 is concerned, Eagle’s case is that an obvious alternative to the different notches on the spools in Brother would be to drive the cylinders by means of ribs inside and to change the geometry of one end in a different way by making one of the apertures of the cylinders smaller than the others. Judge agreed to Eagles argument.

It is seen that the case laws, for obviousness, interpret the evidence and the prior arts from the person who is skilled in the technology. From his point of view Judge questions the Expert witnesses of both the parties. Infact Judge questions the witnesses as to whether the prior art leads a motive to develop to the present patent in question? Whether, skilled team can arrive only to this technology as an alternative to the existing technology in the prior art? and so on. There are certain differences in the degree of obviousness from US courts and English courts point of view. Graham factors, the core factors for finding the obviousness include many factors and are very rigid in nature.

In the next part, we will see the obviousness case of ‘572 patent to assess the degree of obviousness in the UK courts in a detailed manner.

Author – Veera Raghavan Rajendran,
Patent Specialist, IIPRD.
The Author of the Blog can be reached: Raghavan@iiprd.com.

One thought on “DataCard Corporation Vs Eagle Technologies – Part 1”