In the contemporary market, counterfeit goods are an international concern. Statistics show that these counterfeit products harm not just the global economy, but can also adversely affect a company’s business. The fast advancing technology coupled with the liberalization of the Indian economy has created an ideal marketplace for counterfeiters to potentially misuse an existing brand value that may have been crafted and honed over significant periods of time. Losses due to these counterfeit products, to a brand or client may be monetarily incalculable and, for all other purposes, insufferable. If counterfeit issues are not properly tackled, they may cause permanent damage to a brand and its reputation. Since India has massive International boundaries with eight neighboring countries, it makes the country vulnerable to counterfeited products. This also tends to hinder India’s economic development. Hence, it is pertinent that while investing and developing a brand, owners consider the impact of counterfeiting and develop a global anti-counterfeiting strategy to ensure proactive rather than reactive approach. 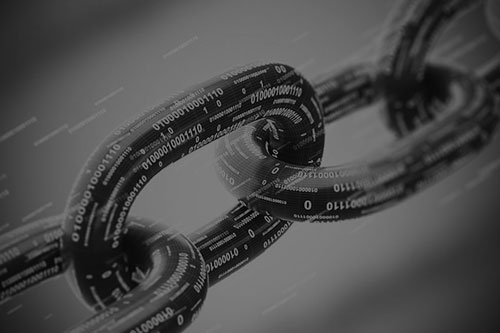 The laws of India provide a wide array of remedies against counterfeiting under various statutes, however, it does not provide a specific law on Counterfeiting. However, our legislators, via various statutes have provided statutory, civil, criminal and administrative remedies. Specifically, counterfeiting has been majorly dealt by Intellectual Property Law, as it directly invokes the Intellectual Property Rights of the aggrieved. For instance, Trademark law necessitates germane action against a passing off instance. Similarly, Copyright Law imparts remedies against plagiarism.

Attorneys at Khurana & Khurana have developed significant experience in the area of anti-counterfeiting, especially in FMCG, Pharmaceuticals, Apparels, Footwear, and Medical Devices product verticals, and can assist in devising a comprehensive strategy for curbing counterfeit products by outlining all possible risks and assumptions and mapping them with costs involved in each step taken so that a judicious and objective step can be taken by the client.

Attorneys at K&K have also been active in initiating criminal actions and getting seizure orders from various Indian courts against individuals and businesses that have manufactured and distributed counterfeits. K&K is also exceptionally versed with Trade Mark Registrations as well as Customs enforcement. Our team has enabled criminal convictions of many counterfeiters, made possible only because we have a strong understanding of the procedures involved, have experience in handling criminal actions and proficiency in filing suits in right jurisdictions to get desired order, and have an established network to enforce the orders with assistance from local police authorities. We provide a plethora of anti- counterfeit services including civil suits, criminal suits as well as conducting investigations in cases of alleged counterfeit goods.

Counterfeiting has only grown and become more proliferated with the advancing technology. This menace has deeply penetrated the markets worldwide, leading to availability of copies of items of high end brands, sold in small random street shops or on myriad websites, both lesser known and popular websites. As a criminal wrong counterfeiting involves infringement of Intellectual Property Rights. Though these rights exist as private rights and are, at most times, enforceable by civil litigation, criminal sanctions can also be issued against their infringement. This is a direct result of the growing instances of counterfeit, passing off and piracy leading to economic damages in huge scores. Statutes such as Trademarks Act, the Copyright Act, and the Geographical Indications Act do provide for criminal remedies. The punishment varies between 6 months and 3 years of imprisonment and a fine ranging from INR 50,000 to 200,000/-. These statutes acknowledge counterfeit as cognizable crime, wherein the police can take action and carry out search and seizure on a court warrant. Khurana & Khurana has considerable experience in providing relief to its Client through Criminal recourse against Counterfeiters, as provided in the following statutes.

Copyright Act,1957: This Act empowers the Police to seize all infringed copies of any copyrighted work. The Act further empowers the Registrar of Copyright to investigate any ship, dock or premises for any infringed works and order them to be confiscated. Section 63 of the Act also provides for imprisonment up to three years and fine for indulging in copyright infringing activities.

The Trade Marks Act, 1999: Section 103 of this Act provides penalty for applying false trademark and/or trade description, etc. with imprisonment up to three years and fine ranging from fifty thousand to two lakh rupees.

Geographical Indications Act, 1999: This Act provides for the GI owners to claim interim and permanent reliefs in cases of GI infringement. Chapter VIII of the Act also provides  for criminal remedies where the term of imprisonment may vary from 6 months to 3 years and a fine from ₹ 50,000 to ₹ 2 lacs.

Anti-Counterfeiting regulations under the Intellectual Property Rights (Imported Goods) Enforcement Rules, 2007: The IPR Rules, 2007 empowers the competent authority at Customs to seize counterfeit goods and/or to suspend the clearance of such goods at the port. These Rules also empower the Customs Department to destroy goods that infringe upon a proprietor’s IP rights.

Each IP owner, in cases of infringement, has the liberty to decide for themselves to agitate a criminal or civil proceeding. That being said, interim or permanent injunctions adjudicated in cases of infringing or misrepresenting sale or manufacture, and orders administering preservation of information and/or rendition of an infringer's accounts, are some of the most effective remedies in IP cases. These remedies are often prompt, best suited and long-lasting, whereas criminal remedies may be drawn out and expensive. However criminal responses tend to have a better deterring effect on counterfeiters.

In cases of counterfeit goods, Civil remedies that can be prayed for include injunctions, damages and rendition of accounts. The mandate of civil remedy is to stop distribution, manufacturing, and retail of the infringing product. Another important mandate of the aforementioned civil remedies is to forbid an infringer from creating a false impression that the offerings under its intellectual property have an association, nexus or affiliation with the products of the original proprietor of the concerned intellectual property.

A civil court is empowered to grant an ex-parte injunction against the counterfeit product. Further, the courts have widened their scope to deal with serious issues of counterfeiting and the jurisprudence under this subject is developing quickly as courts are now more likely  to grant interim reliefs under civil remedies, if the counsel can effectively demonstrate a prima-facie case. Few of such remedies are:

Anton Pillar Order: which gives right to the right holder to visit the defendant’s premises along with the local commissioner appointed by the court, to search and seize the counterfeit goods. These goods are returned to the defendant with an undertaking that the goods will be safely preserved until further orders of the court.

John Doe Order: It is similar to Anton Pillar order, the only difference here is that the defendants are unknown/ or not known. Moreover, this action is taken when it is difficult to identify the counterfeiter or where the counterfeiter is operating out of temporary premises.

Counterfeiting is a widespread commercial evil rather than a conventional crime. The legislature has also established a commercial court in High Courts, in 2016. These courts have the jurisdiction to try cases of counterfeiting.

Since counterfeit is an international concern, various mechanisms have been developed to prevent the practice and discourage the drain on a nation’s wealth. The primary line of defence at borders is the National Customs and Border protection. The Customs Act governs the import and export of goods. Section 11 of this Act aims to enforce IP rights and enables prohibition of certain goods to prevent patents, trademark or copyright infringement. This section also empowers custom officials to confiscate goods that were unlawfully traded. Additionally the statute now enables IP proprietors to submit their grievances with Customs officials for immediate and prompt seizure of the copied goods at the port itself.

The aforementioned Anti-Counterfeiting regulations under the Intellectual Property Rights (Imported Goods) Enforcement Rules, 2007, were notified and enacted in an effort to strengthen custom and trade provisions under the Customs Act 1962 in with special focus on IPR protection at borders.

Khurana & Khurana is experienced in getting civil remedies for its clients such as  Injunctions against Counterfeiters  and getting favorable enforcement orders  in relation to IPs.  We also provide protection of IP rights and IP enforcement at Borders of the Indian territories in compliance with  Customs Act 1962, read with the Intellectual Property Rights (Imported Goods) Enforcement Rules 2007.

Investigation Conducted For Cases Of Counterfeit

Raids (IPR enforcement action) are conducted in compliance with either civil or criminal laws. The initial steps that are taken before carrying out raids are:

(i) Determining the known areas that deal with the counterfeit products (ii) Determining the identity of the person or business using it; (iii) Where and what type of goods and services are being sold; and (iv) If the products are sold through retail, wholesale, or distributorships. 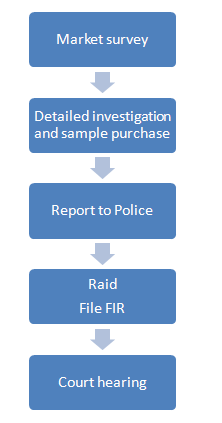 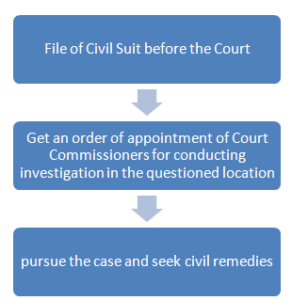 Khurana & Khurana has successfully conducted raids at Mumbai for counterfeit products (trousers) falsifying it to be that of the product under the brand name of woodland. We have proceeded to file FIR for the same along with the police report.

We diligently and efficiently carried out investigation and found out few retailers/whole sellers who were engaged with manufacturing and distributing the LED Televisions falsifying the trademark of Intex and were being imported by China. Thus, a successful raid by us was carried out in the presence of the Police and thereby a FIR was filed. We are in process to take up a criminal case against the infringers. Read More about the case