1. What are patents and its advantages/objectives?

Answer: Patents are techno-legal documents providing the details of new, non-obvious, and industrially applicable inventions. Once approved by the patent office of a certain country/region, the patent provides the patent owner legal rights of monopoly/ right to exclude others from using, -selling, offering for sale, importing – the patented invention in that country, or exporting the patented invention from that country. If however, a third party flouts the legal rights of the patent owner (infringement) he/she/they can be sued in the court of law for injunction and/or damages (compensation).
Few key advantages of patents can be enlisted as below:
– advantage to companies/industry over competitors due to monopolistic rights over a certain invention
– ability to sell/license the patent to another entity can help researchers monetize their invention even if they themselves won’t market the invention
– increased chances of investments and VC interest in patent-protected – inventions because of the advantage of the monopoly
– branding of the technology and new and unique with the patented status

2. What is the application process for a patent?

Answer: The true and first inventor(s), his assignee, or their legal representative – can apply for a patent with a provisional or a complete specification either themselves or through an agent by duly submitting the application form – at the appropriate office. In India, there are 4 offices, namely Delhi, Mumbai, Chennai & Kolkata, and depending on the address of the applicant where he resides, has his domicile, or has a place of business or the place from where invention actually originated, the appropriate office is applicable. In the case of foreign applicants, who don’t have a domicile, place of business in India, place of business, or address for service in India of the patent agent appointed by them is the determining factor for the appropriate office. Specific state-wise details can be accessed here: http://ipindia.nic.in/ipr/patent/patjurid.htm
The date of the first filing of a patent application is called the priority date. In the patent system of first to file, this date becomes important, and if there are two patents/ patent applications with the same/substantially similar subject matter, the earlier priority date patent application/patent survives the other.
If a filing has to be done in other countries, the priority of the initially filed application (parent application) -can be taken and filed in respective countries/regions. The subsequent applications shall have the same priority date as the parent application and are referred to as family members of the initial application and each other. The application process is generally similar but the format of application may differ from country to country and the applicant ordinarily cannot file without the professional assistance of a patent agent or attorney in that country/region.

3. What is the difference between provisional and complete specifications?

4. What are the steps involved in patent registration in India and the timelines associated with it? 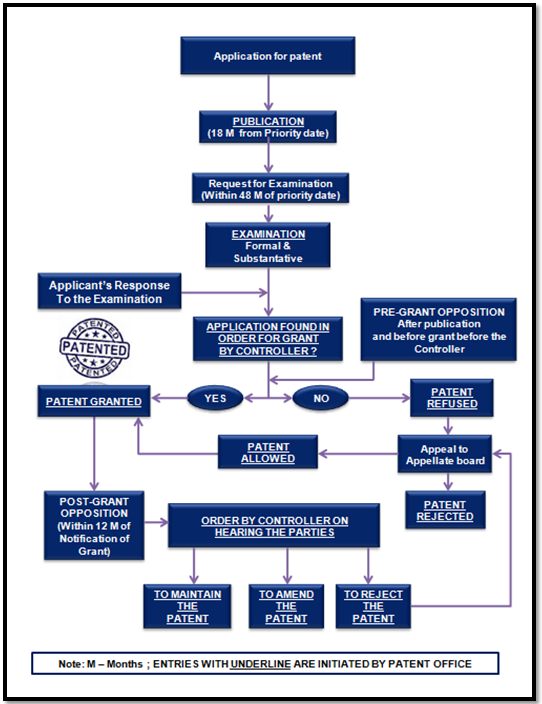 5. When can the phrase ‘patent applied’ or ‘patent pending’ or ‘patented’ be used?

6. Is there a way to add improvements or technical modifications to a patent?

Answer: Ordinarily no new matter can be added to a complete patent specification. However, in such cases, there is a provision of filing a patent of addition in respect of – original patent of application, and thereby claiming through the patent of addition improvements or modification to the invention.

The reader is further advised to click here for an interesting and knowledgeable article on the patent of addition.

7. What are the modes of filing a patent internationally?

Answer: As it stands, there is no unitary worldwide patent and the applicant has to file in respective jurisdictions separately in one of the following routes:
Paris Convention: Direct filing in another country is facilitated through the Paris Convention for all members of the convention which includes India and all major countries. However, the filing through Paris convention has to be done within 12 months from the priority date.
Patent Cooperation Treaty System: PCT is a vehicular system that allows an applicant to file in PCT contracting states within 30-34 months from the priority date (varies from jurisdiction to jurisdiction) instead of 12 months. Not only does the PCT enable extended time periods, but it also simplifies logistic and formal work in terms of documentation and forms. The PCT system also provides for an International Search Report on the invention – giving the applicant a glimpse of the chances of the patent grant in multiple jurisdictions. However, it is pertinent to note that the PCT application itself has to be filed within 12 months from the priority date. Also, not every Paris convention country is a PCT member and in those jurisdictions, only the Paris convention route can be used for patent filing. The comparative listing of the jurisdictions therewith can be accessed here:

8. Are there any restrictions in filing outside India for Indian residents?

9. What is the relevant date from the infringement perspective?

10. When does the applicant have to pay any annuity/ maintenance/ renewal fees for the maintenance of the patent?

11. What is the term of the patent? Can a patent be renewed once it is expired?

Answer: Generally throughout the world, the term of a patent is twenty years from the filing date in the case of domestic patents, and it is twenty years from the date of the international filing date in case of national phase applications entered through Patent Cooperation Treaty (PCT). Some countries also allow patent term adjustment in case of delay from the side of the patent office in the grant of patent and patent term extension in case of delay from the side of regulatory bodies in case of pharmaceutical and agricultural patents. In India, no patent term adjustment or patent term extension is granted. Once a term is expired, patents can’t be renewed.

12. Who may file a request for examination and what is time allowed for putting an application in condition of the grant?

13. Is it possible to file pre-grant opposition even though there is no request for examination filed?

Answer: A patent can be opposed even after the grant. There are different grounds available under section 25 (2) of the Patents Act, 1970. Grounds of section 25 (2) can be used to oppose the patent within a period of 12 months from the date of publishing of the grant of the patent. Section 64 of the Patents Act, 1970 can be used to revoke the patent. Unlike the grounds available under section 25 (2), grounds available under section 64 can be used till the expiry of the patent. The decision of the controller in the post-grant opposition can be appealed and such appeals shall be made within three months from the date of communication or receipt of the order of the appeal. Condonation of delay petition along with necessary fees can also be filed with the genuine reason of delay. According to section 64, a patent may be revoked on the petition of any person interested or central government, or a patent may be revoked by the high court on a counter-claim in a suit for infringement of the patent using one of the grounds of section 64.

15. What is patentability search and is it mandatory?

Answer: It is the search done to find out whether a particular invention is patentable or not. In this search, the study is done to check whether or not a particular invention meets all three criteria of patentability i.e. novelty, non-obviousness, and industrial applicability. Considering the costs involved in the patent registration, getting this search done from professional patent consultants who use paid and non-paid databases, search patent and non-patent literature from all over the world can save a lot of costs if the invention turns out to be non-patentable during the search. However, if one is confident enough of the patentability of the invention, this search can be skipped and patent applications can be filed directly.