Validity of Restrictive Covenants in An Employment Agreement 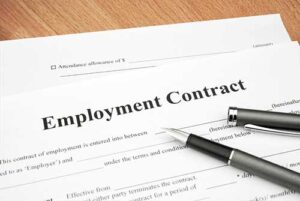 Employees in the course of their employment may be privy to confidential information, trade secrets, and other critical information about the organization and its operations and activities. In order for any business to protect its interest and to ensure that the aforesaid information is not disseminated and revealed to competing businesses, certain restrictive covenants may be included within the scope of employment contracts. A restrictive covenant refers to a clause that restricts or limits an employee from performing certain acts, both during and after the conclusion of the employment contract.

Article 19 (1) (g) of the Constitution of India provides the right to practice any profession or to carry on any occupation, trade, or business to all citizens subject to Art. 19 (6) which enumerates the nature of restriction that can be imposed by the state upon the above right of the citizens.

Section 27 of the Indian Contract Act, 1872 (“Contract Act”) states that every agreement by which anyone is restrained from exercising a lawful profession, trade, or business of any kind, is to that extent void.

The Courts pay close regard to bargain power of each party involved, the reasonableness of restrictions set out, time, place, and manner of restriction in the Non-Compete Clause.

The Supreme Court in the case of Niranjan Shankar Golikari vs. Century Spinning Mills [1] stated that: “..a negative covenant operating in restraint of trade during the term of employment of the employee is enforceable and such restrictions falling within the term of the contract could be enforceable, provided such clauses are not unconscionable or excessively harsh or unreasonable or one-sided.”

Therefore, in order to validate negative covenants in employment agreements or contracts the following reasonable restrictions may be imposed:

A non-solicitation clause typically refers to an agreement between an employer and employee that prohibits an employee from utilizing the company’s clients, customers, and contact lists, etc. after such employee leaves/exits the Company.

“Solicitation is essentially a question of fact. The appellants should prove that the respondents approached their erstwhile customers and only on account of such solicitation, customers placed orders with the respondents. Mere production of quotations would not serve the purpose. It is not that the appellant is left without any remedy. In case the Court ultimately holds that the appellant has got a case on merits, they can be compensated by awarding damages. The supplies made by the respondent to the erstwhile customers of the appellant would be borne out by records. There would be no difficulty to the appellant to prove that in spite of entering into a non-disclosure agreement, the respondent has solicited customers, and pursuant to such solicitation they have actually supplied castings. When there is such an alternative remedy, the question of issuing a prohibitory injunction does not arise.”

The non-disclosure covenant restricts an employee from disclosing any confidential information related to the business to any third party. This clause includes information that an employee may have had access to during the course of employment. Such restriction is valid post the termination of the employment agreement and non-adherence of the same on the part of the former employee attracts legal consequences.

An important case that determined the approach of Courts in disputes concerning Restrictive Covenants vis-à-vis the protection of sensitive and confidential information of an employer is Zee Telefilms Ltd. v. Sundial Communications Pvt. Ltd [3]. In this case, the Bombay High Court propounded a triple test for situations where a Plaintiff sues, relying upon a breach of confidence.

Under the aegis of this test, a plaintiff must establish three elements in order to establish breach under Restrictive Covenants:

Zee Telefilms’ case helped in clearing ambiguity regarding the application and extent of a Restrictive Clause in Litigations involving breach of confidential matters during employment.

Based on the Jurisprudence adopted by Indian Courts, the test for determining the reasonableness of restrictive covenant is as provided below:

It is necessary for any restrictive covenant in an employment agreement to be reasonable, fair, and just. These restrictions can be enforced by the court of law only if they are held to be reasonable and strikes a balance between the rights and obligations of the employer as well as that of the employee. An absolute restriction if challenged may be struck down by the courts. A partial restriction that meets the parameters as set out hereinabove may be enforceable and valid under Indian law. To determine whether such restrictive covenant would be valid or not, Indian courts have taken into regard the reasonableness of the restrictions set out as well as the duration, place, and manner of such restrictions.

Author: Zenna Manoj, an intern at Khurana & Khurana, Advocates and IP Attorneys. In case of any queries please contact/write back to us at anubhav@khuranaandkhurana.com.