A Legal Tussle Between Audiobooks And Audio Summary : A Critical Analysis

Copyright is an integral part of the Intellectual Property Right regime in today’s era. Copyright gives an exclusive right to the creator of any literary, artistic or dramatic work etc. once it has been put in tangible form by the owner. An exclusive right for usage is given to the first owner[1] under which only they have the right to  reproduce, distribute copies, create derivations and to perform the work publicly.[2] These rights with the creator can be performed by any other person only after acquiring license from the creator. 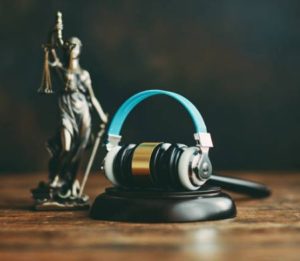 Audiobooks are a verbatim copy of the original literary work in the form of a sound recording which can either be done by the creator himself or can be done by any other licensed personal in order to gain more public attraction. However, an Audio Summary is a concise version of the original literary work which is created in order to help people understand the gist of the work.

The issue relating to Audiobooks and Audio summaries as a subject matter of copyright infringement has been a major concern in recent times.

In May 2022, a case was filed in the Delhi High Court by Pocket FM (which is a platform for podcasting on-demand audiobooks)  against Kuku FM (their competitor) for a major copyright infringement.

In this case, Pocket FM claimed to have an exclusive license with Manjul publishing house who published books like Rich Dad, Poor Dad; Think like a Monk; Eat that frog etc. According to the agreement Pocket FM acquired license from the publisher to create audiobooks of these books in Hindi.

Pocket FM alleged Kuku FM for violation of podcasting audio summaries of the books to which Pocket FM has exclusive right through an agreement with the publisher of those books.

A COMPARITIVE ANALYSIS OF LEGAL PROVISIONS

Audiobooks are considered as the derivation of the literary work, so as to create an audiobook, reproducer has to take permission from publishers by paying him a certain fee in exchange of license for a certain period. Any derivation produced in the market without a license amounts to infringement. In reference to the above mentioned case, all the essential steps which should be taken by a publisher before making any derivation have been followed by the Pocket FM as they acquired the license for making audiobooks from the publication house.

On the other hand,  the Audio summaries which were created by the Kuku FM comes under the adaptation and abridgment right which has been defined under the Copyrights Act.

The Copyrights Act defines adaptation as ‘in relation to literary work, the conversion of the work in any other form is considered as adaptation of that work.’[3] Abridgment which is a part of the same section, ‘in relation to the literary work means reproducing a version of the work which has already been produced in which the story or action is conveyed wholly or mainly by means of a picture in a form which is suitable for reproduction in a book etc.’[4] Abridgment is when a literary work is converted into another literary format. In reference to the present case the audio summaries which were created by Kuku FM clearly come under the ambit of abridgment wherein, the books produced by Manjul Publishing House were reproduced in another literary form, however, in order to make any such adaptations the literary book, license has to be acquired to prevent copyright infringement.

Audio summaries are not a verbatim copy of the work of the owner and are merely abstracts, a shorter version of the book which has already been published, these summaries are created to give a gist of the book or to convey the idea as to what a book is about, therefore, for creation of such a form being an abstract it becomes more important for the reproducing companies to take license as the summaries might be conveyed in a way which gives a bad impression to the book, further in order to interpret the authors point of view it becomes very important for the first owner of the book to produce it themselves or give license to any other person who they can trust would not give a bad word to the book in general. Therefore, summaries are a complete different from audio books as the producer might miss out some important details with respect to the book which might affect its reputation. Therefore, in order to prevent any of it, copyright act mentions the right under which license can be taken from the first publisher.[5]

Further section 52 of the act[6] mentions certain acts which do not lead to infringement of copyright. Another question which arises in this situation is whether making audio summaries come under the fair dealing which states that fair dealing with any work produced for (i) private or personal use; (ii) criticism or review or; (iii) reporting of current event does not lead to copyright infringement. As in the current case in Section 52(a)(ii) is taken into consideration arguing that the audio summary produced by Kuku FM was for the reason of review which comes under the ambit of fair dealing, therefore, cannot be considered as an infringement.

As the case is still pending before the Delhi High Court, in my opinion audio summaries created by Kuku FM, without acquiring licence from the producer, were made to give a gist of the content, and not for reviewing purposes. Since, license was given to Pocket FM, for similar work, it leads to copyright infringement. However, in the court Kuku FM defended themselves with the help of a Madras High Court Judgment[7] wherein, the court held that creating a guidebook was not an infringement as it was with the intension to help University students. In another case of the Delhi High Court[8] that guidebook are a form which explain the source of work which amount to review under Section 52, the nature and creation of the guidebook has a degree or analysis and critical thinking which is completely absent in case of summaries.

Considering the case of audiobooks v. audio summary, the abridgment made by Kuku FM is a summary that is an abstract of what the book is about, summaries created to give a gist of a literary work and not ideally for reviewing or analysing purpose, therefore, audio summaries produced by Kuku FM cannot be treated as an exception under fair dealing.

Audiobooks and audio summaries are two sides of the same coin. They are similar due to the mode their transmission, sensory appeal, and are based on books. Whereas, analysing their content the difference is clearly established. As seen, an audiobook is a verbatim copy of an existing book, and an audio summary is a gist or a shorter version of a book. While considering these two as a subject-matter of copyright, both can lead to an infringement as they are converting a literary work from written format to an audio version, and this action comes under adaptation and abridgement under the Act. In order to protect the rights of the first owner, it is essential to take permission in both the cases. Further, in terms of the content which is being transmitted, an audiobook provides an extensive version and gives the listener an experience which is the same as reading the book. In the current era, most people prefer audiobooks as it is a convenient way of accessing the literary work. Whereas, an audio summary does not provide for the same, it is a shorter-version, and several important parts of the book might be missing, which may lead to false representation of the book and affect the reputation of the author. Considering the degree of harm the audio version can cause, it is seen that an audio-summary is more harmful to the author.

Considering the growth and need of audio versions of books, certain steps can be taken in order to prevent any conflict between these types of books:

Author: Avantika Singh, Symbiosis Law School, Pune, in case of any queries please contact/write back to us via email to chhavi@khuranaandkhurana.com or at Khurana & Khurana, Advocates and IP Attorney.