M&As in Banking Sector : A Much Viable Strategy

Mergers and acquisitions (M&As) are the most popular method employed by companies to further their market dominance. Mergers and acquisitions are often regarded as a swift and effective strategy for penetrating new markets and gaining access to cutting-edge technologies. For instance, PNB acquired New Bank of India in 1993. Only one other nationalised bank, other than SBI and its associates, has merged with another. The number of government-owned banks was cut from 27 to 12 in August of 2019. PNB, the second biggest in India, recently bought the “Bank of India, United Bank of India, and Oriental Bank of Commerce.” 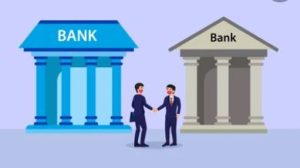 Laws on M&As in Banking sector

As per Sec. 44A of Banking Regulation Act, 1949, no banks may merge until the proposed merger has received the approval of two-thirds of the shareholders of each merging bank.[1] It is then forwarded for clearance to the RBI. But as of right now, either in person or by proxy, at the particular public meeting convened to review the program, participation is required. Additionally, the Banking Laws (Amendment) Act of 2011’s Section 2A makes it clear that no banking firm is subject to the Competition Act’s rules. Chapter XV of the Companies Act of 2013 mandates, as was previously required solely by the Companies Act of 1956, that any planned merger between a bank and a non-banking entity must first have the consent of the HC and then the RBI in order to be implemented. In India, the Competition Act of 2002 is the primary statute regulating M&As. This law was enacted primarily to restrict anti-competitive practices and in order to regulate combinations, such as M&As. Any bank that is in compliance with a loan or investment agreement is excluded from the strict requirements of the M&A clause; nonetheless, the CCI must be notified of the combination within 7 days.[2] 2017 saw the government exclude mergers of nationalized banks from requiring clearance from CCI. The goal was to open the door for quick consolidation in the PSU banking sector. The announcement of this 10-year exemption came as many academics and even some government officials were debating the need of banking sector consolidation, especially among state-run banks.

Merits and Demerits of M&As in banking sector

According to RBI, there were 5,743 frauds recorded by PSBs in 2018-19, involving a total of 95,760.49 crores from April 1 to September 30. PSBs have a stake that is disproportionate to their proportional business share at 85%.[3] It seems from the outset that these instances include high management as well as midlevel workers, as well as political meddling and a “pro-corporate” stance on the part of decision-makers. When NPAs in the banking sector reach alarmingly high levels, it indicates both transmission system inefficiencies and the financial plight of borrower customers like Vijay Malaya, Nirav Modi, and Dewan Housing. According to statistics, India had the second-highest bad loan percentage after Italy in 2018 and rose to become one of the ten biggest economies in the world. This is owing to the fact that 90% of these non-performing assets are believed to be held by government-controlled entities. In the fiscal year that ended on March 31, 2018, the 4 PSBs— “Bank of Baroda, IDBI Bank Ltd., Oriental Bank of Commerce, and Central Bank of India”—incurred losses of Rs. 21,646.38 crore, forcing government to explore the option of merging them.These grave conditions necessitated the consolidation of Center Bank’s assets. The primary goals of a merger and acquisition like this are to consolidate banks, restrict the growth in non-performing loans or bad loans, maintain strong financial health, upgrade technology, and assure improved scale efficiency. Additionally, it aids in the rapid acquisition of a sizable number of new clients. An acquisition not only expands the amount of cash available to a bank for lending and investing, but it also gives it a larger operating area. By capitalizing these banks, the general public’s taxes are being utilized to rescue failing private institutions. Other problems include execution risk when putting two new banks on the same platform, coordination between HR and IT, streamlining of processes, compliance and risk cultures that don’t match up and hurt the business’s profits, and small banks losing their local identities during a merger.

Major mergers and acquisitions have been taking place in the banking sector in recent years in order to achieve bank consolidation. Additionally, it would aid in the institution’s rapid expansion and rapid acquisition of a huge number of new clients. An acquisition not only expands the amount of cash available to your bank for lending and investing, but it also gives it a larger operating area. But if mergers go too far, it might be a serious problem for the Indian economy. However, the consolidation has resulted in a historically high degree of bank concentration at the market level and might have an impact on the level of competition in the banking industry. Mergers do seem to be a solution since the country’s nonperforming assets (NPAs) and bad loans have adversely affected its reputation abroad. However, the government should constantly monitor anti-competitive mergers and abuses of power in the banking industry. The government now needs to enact crucial merger legislation pertaining to both PSBs and private banking organizations considering their increasing relevance.

Author: Priyanshi Agarwal, B.com Llb 5th Year student of Banasthali Vidyapith, in case of any queries please contact/write back to us via email to chhavi@khuranaandkhurana.com or at  Khurana & Khurana, Advocates and IP Attorney.