Media being one of the foundation pillars of Indian Democracy, plays an extremely crucial role in affecting, influencing, and creating the mindsets of general public either in or against of any individual accused of crime. Especially, in the cases of celebrities or high-profile cases, media actively not just create a hysteria amongst the people about the molded facts shown by them but also creates a majorly biased opinion in the mind a common man. Before the court, reaches to its final judgement.

However, Media Trials are not always wrong on their part, as there have been situations when media trial helped the victims of crime to get access to fair justice and enhanced process of fair trial against accused who were more influential.

Instances of Media Trial and its origin

The term media trail can be traced back from the very famous case, popularly named as the “fatty” Arbuckle Scandal in 1921 . In the prevalent case, Arbuckle who was an accused was acquitted by the court but lost everything that he had including his job and his public image as media had already declared him guilty before the judgment came. During the 20th century another prevalent case of that time in 1995, which is popular as “trial of OJ Simpson” is also a cult example of media trial in which, media ultimately molded and shaped the biased opinion of general people against this individual. In all such cases medial has not only strongly influenced the opinion of people and made themselves declare someone merely accused, guilty in the eyes of society but also tore down their professional reputation and public image. 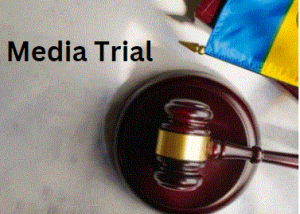 Well, since every coin has two sides , media trial in Indian system has also been proven as a boon for victims who suffered due to lengthy and engaging judicial process of trial but got their process of “fair trial” enhanced with the help of Media , for instance, The “Jessica Lal murder case of 1999” – in this case media not only supported her sister who fought for access to justice for Jessica, who was gruesomely murdered but also put an effort to make sure the accused who was initially acquitted by the trial court gets the punishment he deserved though he was initially acquitted after the trial from session court.

In the past decade in India, there have been many cases in which media tore down the lives of people and their career because of the reason that they are accused of the crime. This term recently came into picture again when, trial of murder mystery of actor Sushant Singh Rajpoot became a sensational event during the pandemic, the world was already going through. Media not only, harassed the accused mentally during the investigation but also tried to portray an image of accused as a guilty.

However, for the instance , there have been cases such as “the Priyadarshini Mattoo case(2006)” – in this case a law student who was raped and murdered also attracted the media interference in the process of trial and hence, the judgment is suspected to be affected by the media trial as albeit the accused being initially acquitted by the lower court; thus recently the judgement convicting Santosh Kumar Singh by the Delhi High Court . Therefore, it was a win for media support through its report and people’s outcry for justice, that the Delhi High Court on October 27,2006 set aside a “perverse” lower court judgement and convicted the former IPS officer’s son for raping and murdering 23-year-old Priyadarshini Mattoo, after 11 years of her death. To give the other instances of cases in which press, and media had influenced the minds of people,

“the Aarushi Talwar dual murder case” – In this case as the parents of the deceased were the prime accused whom media declared guilty and came up with its own theory, prior the actual judgement was passed by the court.

Constitutionality of such trial by the media

Well to say if we look at the constitutionality of how media so freely opine its biased opinion and deeply influence the minds of people. It can be referred from the Article 19 (1) of the constitution , which gives us the freedom of expression, holding opinions etc. but nowhere specifically mentions about the right given to media for trial of the accused, also neither a separate right as freedom of press but it is contained in the Article 19 impliedly. There have been some landmark cases related with the media trial, which can be given a read for better understanding of the term and its effect in Indian society.

Case of “Sushil Sharma vs the State (Delhi Administration) (1996)” – In this mentioned case of Naina Sahni , Sushil Sharma who was already going through the murder trial pleaded and showed his grief before the court about media tarnishing his public image by calling him a killer, before the court has reached to any conclusion. In this case the facts suggested about the gruesome murder of Naina Sahni by her husband also the statements were given by the Police officials in the press helped them to sensationalize the case, also media declared the accused as guilty depending upon its opinion before the judgement came. The High court of Delhi explicitly held that “The awareness of what is happening around in the society to a great extent is the work-force of journalists. Mature investigative journalism helps in unearthing many skeletons Democratic institutions are surviving, thanks to the eternal vigilance of the journalists. But for journalists also there is code of conduct and ethical norms. The task to keep restraint in pending matters is expected more from the investigating and prosecuting agencies. Similarly, the Judge dealing with sensitive and important matters have to exercise due restraint in their utterances. It is rightly said that the Judge speak through their judgments only keeping this dictum in mind, we have to see as to what is the grievance of this petitioner.” Also in the mentioned case court mentioned explicitly that it cannot take decision based on what media thinks of that person but the judgement and charges that has to be framed shall solely depend upon the evidences acquired during the investigation.

However, there have been cases, where the Hon’ble Supreme Court has stated that the trial by electronic media( television, radio etc) , newspapers, social media, or any other way of public agitation are the ways where they could be described as anti-thesis of the general rule of law leading to the miscarriage of justice. thoughts provoked by media during sensationalizing the event can also bring deviations in the civil society and can cause a serious vicissitudes in the peaceful situation.

Therefore, after understanding the way how “media trial” has previously, also recently influenced the public opinion and affected the process of ‘fair trial” it can be concluded that the effect has been mostly detrimental, than useful or fruitful to the society at large. Similarly, there arises an utmost urgent need to regulate the conduct of media and consider what is contempt of the court during the media trial.

Author: Atharva Dutt Pandey, a student of B.B.A LL.B from Bharati Vidyapeeth New Law College, Pune, in case of any queries please contact/write back to us via email to chhavi@khuranaandkhurana.com or at Khurana & Khurana, Advocates and IP Attorney.