The Relevancy of ‘Waterfall Mechanism’ in 2022 under IBC

The lawmakers designed the Insolvency and Bankruptcy Code, 2016 (‘IBC’) to provide an adequate legal framework for timely resolution of Insolvency and Bankruptcy and recovery. The Preamble of the Code states the purpose for which the said Code is enacted. The Code is ever-evolving through a series of case laws, and the Judiciary interprets the law drafted by the legislative body. The Apex Court of India passed Judgement, State Tax Officer v. Rainbow Papers Lmited[1]. This case has dealt with the question of “whether the provisions of the Insolvency and Bankruptcy Code, 2016 (‘IBC’) (Section 53) overrides Section 48 of the Gujrat Value Added Tax, 2003 (‘GVAT’).” While deciding on this issue, the Supreme Court has clarified the definition of ‘Secured Creditors’ Section 3(13) of the Insolvency and Bankruptcy Code, 2016 (‘IBC’) from a judicial point of view and has indeed opened various avenues for discussion on the said matter. This article shall discuss the contentions of the judgement whilst deciphering the definition clause of the Code and how the Apex Court has taken a different approach to Section 53 of IBC and the “waterfall mechanism” during the resolution procedure under IBC.

Analysis of the case law:

This case: State Tax Officer v. Rainbow Papers Limited,2022 began when the National Company Law Tribunal (‘NCLT’) held that the Government couldn’t claim the first charge over the property of the corporate debtor during the resolution procedure. Under IBC, “charge” is defined in Section 3(4); of IBC. The tribunal took this view because Section 48 of GVAT tax first charge is provided on the dealer’s property in respect of any amount payable by the dealer on account of tax, interest, penalty etc. The Appellant authority NCLAT agreed and upheld the decision of NCLT. But the Apex Court disagreed with the view of NCLAT and reversed the decision by rejecting the resolution plan as the plan ignored the statutory dues and stated that Section 53 of the IBC over-rides Section 48 of the GVAT Act, and the order passed by the Apex Court was against the judgement and order passed by NCLAT in 2019, and the judgement passed by the Supreme Court is in favour of the State.The Apex Court also held that the “debt owned to a Security Creditor is to be ranked equally with other specified debt including woken dues of 24 months under the GVAT Act”. 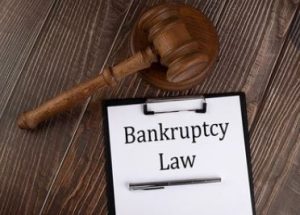 The Government contended “that a simple reading of Secured Creditors Section 3(30) of ‘IBC’ and Security interest Section 3(31)of ‘IBC’ makes it clear that Insolvency and Bankruptcy Code, 2016 (‘IBC’) that the ‘State’ is not excluded as a Secured Creditor as the definition ‘Secured Creditor’ is far-reaching and wide enough to cover all types of Security Interest”.[2]  It was also held that such a resolution plan is not fulfilling the requirement of section 30(2), “bench” which means the Adjudicating authority. The Additional Solicitor General Submitted in his argument before the Supreme Court stating that the decision of NCLAT is contrary to the law and can’t be sustained as the mere fact that a creditor might be an operational creditor would not result in the loss of the status of the operational creditor as a secured creditor. NCLAT held that Section 48 of the GVAT Act, 2002 can’t prevail over Section 53 of IBC. The Government cited various case laws like Assistant Commissioner of Customs v. Mathur Sabhapathy Vishwanathan[3], Which held that “rejection of the claim of the state is unsustainable in law.” The State should fall under the purview of a “Secured creditor.”

Section 53: The heart of IBC

Understanding Section 53 of the Insolvency and Bankruptcy Code, 2016 (‘IBC’) is crucial to appreciate the judgement. The said section deals with the mechanism for the distribution of assets under the liquidation of the company. This mechanism is laid down under the Code and is termed the “Waterfall Mechanism”, which puts down a sum of stakeholders in a sequential manner which designates the priority in which the payment will be distributed from liquidation. The payment priority U/S.53 of Insolvency and Bankruptcy Code, 2016 (‘IBC’) is first given for Insolvency Resolution Procedure (IRP) and liquidation cost. After the cost payment, workmen who fall under the first category of the list and secured creditors under second place in the waterfall mechanism are placed at par with “workmen’s dues for 24 months before the liquidation commencement date” under section 53 of IBC.[4] It is clear by the provision that there are categories and according to their place, the priority will be given for example, secured creditors are on 2nd place whereas government dues are on 5th place.  Section 52 of IBC confers each secured creditor with an option to either relinquish its right to the liquidation estate or realise its security interest. seperataly, subject to the provisions of IBC. after the relinquishment of the security interest by the secured creditors, the secured assets become a part of the liquidation estate of the corporate debtor, and [5] the liquidator can such assets can be sold under regulation 32 of Insolvency and Bankruptcy Board of India (Liquidation Process) Regulations, 2016. And, if the secured creditors determine to realize their interest in the secured assets of the corporate debtor, such assets will not become part of the liquidation estate of the corporate debtor. 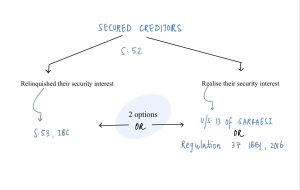 The government dues are under the fifth category under the waterfall mechanism, according to Section 53 of the Code. In a recent case, Technology Development Board v. Anil Goel,[6] the Appellant tribunal discussed the waterfall mechanism under Section 53 of ‘IBC’. The tribunal held “that when secured creditors have the option between relinquishing their right in favour of the liquidation estate and realising their security interests individually, once they choose to relinquish interest, the repayment will take place strictly as per Section 53 of IBC, which does not recognise any distinction between different classes of ‘secured creditors'”.

A contrary point of view from the judgment of the Apex Court is that it has been stated in the judgement that the security interest defined in Section 3(30) of the IBC could be created by the “operation of law” and the definition of Secured Creditor in IBC does not exclude any government or governmental authority. But the definition of Secured Creditor Section 3(30) clearly states that the interest is created by a transaction that secures payment and not by operation of law as enumerated in the definition. The observation of the Apex court, which is to give priority to the government dues, may not align with the creation of the Corporate Insolvency Resolution Process (‘CIRP‘) under IBC. If we look at the law, Section 53(1)(v) of the Code states that the Income Tax department is not a Secured Creditor, and the debt owned by the department is like dues that add to the consolidated fund of the State.

The stance of the Apex court is different in this case; the Court has put Secured Creditors, tax authorities and workmen all on the same pedestal, which makes the waterfall mechanism blurry. Section 53 of the Code has set clear demarcations of the payment during the procedure of Insolvency, but the Supreme Court has interpreted and approached the law differently from the Judiciary.

Author: Yashaswi Singh, a student from the University of Petroleum and Energy Studies (UPES), Dehradun, in case of any queries please contact/write back to us via email to chhavi@khuranaandkhurana.com or at  Khurana & Khurana, Advocates and IP Attorney