Role of Press in a Democracy

The fourth pillar of democracy is the media. It is essential that the media play a part in developing a democratic culture that transcends the political system and gradually permeates the collective consciousness. Over time, there has been a significant improvement in the media’s interaction with the general population. The media, whether it be print or electronic, has ingrained itself into the lives of Indians, who rely heavily on its coverage for news and entertainment. 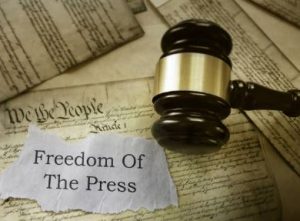 The media keeps people up at night, and there is no disputing that it has developed into one of the key agents of societal change, starting with concerns pertaining to the average person, their sentiments, needs, expectations, and every element of their life intimately related to the media. In a democratic environment, the media both quickens the pace of growth and supports democratic norms and principles. The press’s function in a democracy can be varied and viewed from many angles, but it must operate within the bounds of the Grundnorm, or the fundamental law of the land, which in India is the Constitution of India.

The role of media in Indian society: The Preamble of the Indian Constitution guarantees freedom of thought, speech, and expression for all Indian citizens. As freedom of the press is not explicitly enshrined in the Indian Constitution, the media derive their rights from Article 19 (1) (a) of this document, which deals with freedom of speech and expression. Press freedom is essential for democracy, and it is particularly important in a large democracy like India.

Due to the absence of a specific provision safeguarding press freedom in the constitution, the courts in India promoted and protected press independence. Therefore, the media has the same right to write, distribute, flow, and communicate as any other person. When India’s post-independence constitution was written, the question was whether to add a separate clause protecting the freedom of the press, as in the US Constitution, or include it in the right to freedom of speech and expression, as in the British Constitution.

According to the Supreme Court’s ruling in Romesh Thapar v. State of Madras , the right to distribution is just as important as the right to publish. The Newspaper (Price and Pages) Act of 1956 , which gave the government the authority to control the space for advertisements, was an indirect attempt by the government to restrict freedom. Sakal News Papers v. Union of India was overturned by the judiciary because it would have a negative effect on circulation.

While the judiciary has upheld journalistic freedoms, it has sometimes placed restrictions on them in the name of justice. In State of Bihar v. Shailabala Devi , the Supreme Court ruled that the dissemination and publishing of information that incites or encourages heinous acts like murder, etc., will jeopardise the security of the state and must be prohibited. According to the court’s ruling in the case of Dr. D.C. Saxena v. The Chief Justice of India , society is equally qualified to control freedom of speech or expression by democratic action if the preservation of democracy is the foundation for it. The root of the problem is obvious; for instance, society supports freedom of speech and expression but also limits the rights of the majority.

The press has unavoidably become weak and predisposed to giving in to authoritarian dictates as a result of this incorrect application of the equality doctrine under the pretence of idealistic objectives due to its lack of protection. The judiciary has repeatedly intervened to protect press freedom, but if this dependence on the judiciary’s suzerainty continues, it calls into question the foresight of the constitution’s framers and the inferiority of the press’s immunity as provided by the law of the largest democracy in the world.

The media is essential in a democracy for disseminating news and information about national and international events. There is no mutual trust between the administration and the media. They employ a strategy of finger-pointing in which they accuse both the government and the public of being unreliable, since both groups may believe that the media is disseminating incorrect information to the public. The media’s role has evolved into being utterly crucial to the effective operation of democracy, and it helps shape public opinion on issues and themes. It is presumed that the media represents the people and scrutinises the government.

Author: Basudev Behera, in case of any queries please contact/write back to us via email to chhavi@khuranaandkhurana.com or at  Khurana & Khurana, Advocates and IP Attorney.