Often nations dispute over a variety of factors and reasons, ranging from natural resources, territory , river water, oilfields to games and sports. However, how often is it seen that the bone of contention between two nations is an item consumed by people of both sides equally? In 2021, Indian Pakistan locked into an intellectual property dispute over the ownership of endemic aromatic fine –grain rice, or known as Basmati Rice, a crop which is a hallmark crop of the Indian subcontinent, was contested by both nations over its patentability. Geographical Indication gives a certain product, man-made or natural, status of being endemic to that particular region, and hence found or made nowhere else. The product can be named along with the Geographical location where it is most commonly found or made eg- Bengali Rasgulla, Benarsi silk saree, Kashmiri Shawl etc. A GI tag can be awarded to a variety of products, ranging from  fabrics and textiles , foodstuffs and beverages , pottery and handicraft , spices, herbs and natural condiments , industrial products etc. The important aspect about awarding GI status to a particular item is that it is not found, grown , manufactured or synthesized by any man made process anywhere else other than the place , owing to factors such as favorable climate , conducive crop quality , specific quality of raw material available , climate etc. 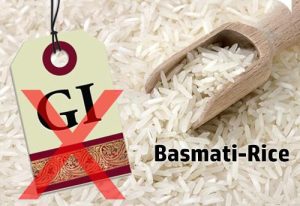 Indian Being a member state of the World Trade Organization, enacted the Geographical Indications of Goods (Registration and Protection) Act, 1999 to regulate the registrations and grant of GIs in India. Section 2 (e) defines geographical indications in relation to goods as an indication which identifies such goods as agricultural goods, natural goods or manufactured goods as originating, or manufactured in the territory of a country, or a region or locality in that territory, where a given quality, reputation or other characteristic of such goods is essentially attributable to its geographical origin and in case where such goods are manufactured goods one of the activities of either the production or of processing or preparation of the goods concerned takes place in such territory, region or locality, as the case may be.  A GI Tag is given to a product owing to it’s distinct and unique character, nature and qualities possessed by it, which cannot be procured anywhere else. The first GI Tag in India was awarded to the Darjeeling Tea in 2004 and since then more than 300 tags have been registered so far. Owing to the fact that most of the manufacturers or producers of these products live obscurely and work for non-economical gains, the purpose of granting Geographical is to give impetus to the local industry by protecting their exotic essence from being exploited by commercial market players. Hence, GI Tag is a type of copyright for generic goods which have been made or presented in such a way as to render it in contrast with similar goods produced elsewhere, or with inferior processes. A GI tag granted remains valid for 10 years and is entered in the Geographical Indications Registry (DPIIT). GI tags are protected under the 1999 act and anyone found to be infringing the tags would be penalized .In Tea Board of India vs. ITC Limited (2011), the defendant used the word “Darjeeling” for the purpose of marketing it’s lounge and the same was contended to be infringing  the exclusive right to the plaintiff with respect to the word “Darjeeling”.

Origin of the dispute

India and Pakistan have been co- owners of the GI Tag for Basmati Rice. In 2017, Indian was given the GI Tag for Basmati Rice from the Indian Patent Office. Since the foodstuff is grown across both borders, the contention that it belonged to either nation was tenable. IN 2021, India applied to the European Union’s Council on Quality Schemes for Agriculture and Foodstuffs for grant of GI tag. India exports more than 60% of the Basmati produced, whereas Pakistan’s export too multiplied over the years, specifically to the European Union. Pakistan’s Rice Producers’ Association filed an opposition notice with the EU against India’s application. According to the Association, the Basmati must share joint recognition of both the states so as to ensure smooth functioning of business. Pakistan enjoys a favorable position in the EU, thanks to the major Basmati Exports being directed towards EU only. Both Pakistan and India have got basmati registered within their respective local jurisdictions. The exotic food grains, being endemic to the subcontinent since the pre-independence era, has been bickered over by both sides.

Despite the shared heritage, India put forward the claim that the region producing basmati is a part of northern India, below the foothills of the Himalayas forming part of the Indo-Gangetic plain. Hence, the long –grain fragrant export-quality rice was claimed to be an exclusive propriety of India. This claim to the EU was challenged in December 2019 and the main argument by Pakistan was that Basmati rice was a joint product of India and Pakistan. International laws require that before applying for registration of any product in the international market it has to be protected under the geographical indication laws of that country. Pakistan enacted the Geographical Indications (Registration and Protection) Act in March 2020, which gives it the right to oppose Indian application for registration of Basmati rice exclusive rights.

Basmati rice is one of the most important cash crops of Pakistan , with its contribution to Pakistan’s GDP alone being 0.7% and 3.2 percent of the total agricultural value . Over the years. Pakistan shifted its trade policy, thereby routing cash crops majorly towards the EU, whereas India on the other hand significantly reduced exports to the EU.

The clash of IP between India and Pakistan was earlier seen in the case of fine Pashmina fabric as well, which is endemic to the Northern (Kashmir) part of both the countries. India had succeeded in securing a GI Tag in that matter. In the case of Basmati, both countries had decided to file a mutually combined application for the recognition of Basmati Rice with the EU. However, the process was halted due to the 26/11 Terrorist Attacks, and the applications were withdrawn. It took almost a decade till 2018 when India had provisionally applied for a GI tag for Basmati as Protected Geographical Indicator (PGI) and the same was published in the Official Journal of the European Union. The Indian Application claimed that Indian does not claim to be the sole harvester of basmati rice . his weak point became an opportunity for the neighboring state to contrast India’s claim. In 2019, Pakistan filed an opposition with the EU contending India’s claim over Basmati citing the fact that the Basmati is a joint product of both India and Pakistan. Since, the International Law mandates that a GI tag, or any other intellectual property which would be protected globally, shall first be registered and recognized by the Country’s local laws first , hence Pakistan was prompted to pass the  Geographical Indications (Registration and Protection) Act, 2020 which allowed It to contest India’s claim for Basmati Rice.

The “war of Tags” is still waging between the two nations, wherein each nation is tussling to gain the exclusive right of IP registered in their name. The conflict is tense and prolonged due the fact that a GI tag carries far-reaching implication in favor of the proprietor. As per Article 13 of the No. 1151/2012 of The European Parliament and of the Council, it stipulates that a PGI should not become a commonly used term or a generic terminology and prohibits the use of the word Basmati with any other phrases or alternate versions .  In other words, India would enjoy sole monopoly over the intellectual ownership of the Basmati Rice.

Author: Akshit Gupta, A Student of Bharti Vidyapeeth New Law College, Pune, in case of any queries please contact/write back to us via email chhavi@khuranaandkhurana.com or at Khurana & Khurana, Advocates and IP Attorney.