Levi Strauss And Co. Vs. Imperial Online Services Private Limited And Ors. –A New Development In The Realm Of Unconventional Trademarks.

This case of Levi Strauss & Co. v. Imperial Online Services Pvt. Ltd. is bound to become a pivotal event in the realm of non-traditional trademark protection. The primary issue, in this case, was whether or not stitching patterns qualified for trademark protection under the Trade Marks Act, 1999. This suit was filed in order to obtain a permanent injunction preventing trademark infringement, copyright infringement, and trademark passing off, among other reliefs by Levi. 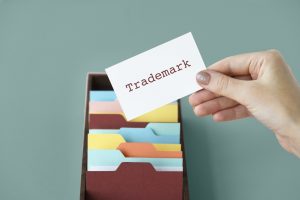 The ‘Arcuate Stitching Design’ which is the stitching pattern used by Levi was held to have become ‘well known to the public due to extensive use spanning over a century and a half. The obvious parallel effect of this will be that if the mark is used in relation to any other goods or services by any other business, it would likely be perceived as indicating a connection between those goods and Levi’s jeans. Thus In order to prohibit the defendants, Imperial Online Services Pvt. Ltd, from using the ‘Arcuate Stitching Design,’ Levi Strauss & co. filed a case. The stitch pattern is registered as a trademark in India. 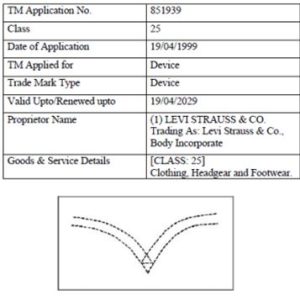 FACTS OF THE CASE –

The Plaintiff-Levi Strauss & Co.-filed the current claim seeking a permanent injunction preventing trademark infringement, copyright infringement, trademark passing off, and other reliefs. The Plaintiff seeks protection for its stitching design, known as the ‘Arcuate Stitching Design’ mark, in the lawsuit. The stitching pattern is as follows-

According to the Plaintiff, the claimed mark was adopted in 1873 and is used on all textiles, including denim jeans, made and marketed by the Plaintiff. The Plaintiffs argued that the Defendants sold denim jeans with a similar ‘Arcuate Stitching Design’ mark on the website www.urbanofashion.com and other e-commerce platforms. The Plaintiff discovered the infringing products on a variety of e-commerce sites, including amazon.in, flipkart.com, nykaafashion.com, myntra.com, snapdeal.com, limeroad.com, and paytmmall.com. The mark used by the defendant is as follows-

Despite the undertaking, the Defendants continued to manufacture and sell the aforementioned denim pants bearing the Plaintiff’s Arcuate Stitching Design’ mark, leading the Plaintiff to file the current suit.

CONTENTIONS OF THE PARTIES

After the defendants were served, a written statement was submitted by them, in which they had requested a six-month extension initially for stock disposal, and that due to the pandemic period and corresponding lockdowns, it could not be strictly adhered to. They also stated that for more than two months, the lockdowns during COVID seriously hindered their sales. But as required by the Undertaking, the Defendant removed all stock bearing the Arcuate Stitching Design Trademark and was in the process of updating its product listings across platforms to reflect its updated designs.

The Defendant requested an additional three weeks to complete the removal after informing the Plaintiff of the delay in updating the product listings and the unanticipated pandemic situation’s impact on its sales. The Plaintiff gave the Defendant permission to stop using the Arcuate Stitching Design Trademark by October 15, 2021. Thus, it is clear from the foregoing that the Defendant’s use of the Arcuate Stitching Design Trademark was initially honest and concurrent use and after that, it was to be permitted use until 15 October 2021 in accordance with Section 2(r)(ii)(c) of the Trade Marks Act, 1999

The defendant further claimed that as of October 15, 2021, it had stopped selling any goods displaying the Arcuate Stitching Design trademark and had completely removed all of its goods bearing the trademark from all platforms. The Plaintiff was also made aware of this fact by the Defendant in a letter dated December 16, 2021.

It was claimed by the plaintiff that the defendants are in contempt of court since they are not upholding the promises they made in the undertaking as well as not abiding by the ad interim injunction issued by the court.

The Counsel for the Defendants claimed that the Defendants were willing to accept the permanent injunction and have no intention of manufacturing or selling any fabrics, textiles, or garments bearing the Plaintiff’s ‘Arcuate Stitching Design’ mark. The Plaintiff sought Rs. 8.5 lakhs in legal costs and damages, which the Defendants object to.

It was held that the ‘Arcuate Stitching Design’ which is the stitching pattern used by Levi has become ‘well known to the public through the use of garments bearing said stitching pattern thus Levi’s jeans’ distinctive style was awarded trademark protection as well was certified as a well-known mark since the mark is found to be an extraordinarily unique mark that has acquired secondary meaning due to extensive use spanning over a century and a half.
On the facts, the Defendants already had agreed to a permanent injunction. Given the position taken by Counsel for the Defendants before the Court, it was deemed appropriate to end the dispute by decreeing the suit and awarding the Plaintiff partial costs.
Further, Justice Pratibha M. Singh issued an injunction to prevent the unauthorized use of the ‘Arcuate Stitching Design’ by the defendants.

In simple terms, a trademark is a mark that businesses use to identify their products/services. As consumers, we use trademarks to identify these goods and associate them with their owner. Trademarks are classified into two types: traditional and non-traditional. Examples of the former include names, words, gadgets, logos, labels/packaging, letters, numbers, and so on. However, the definition of a trademark has evolved over time to include colour combinations, shape of things, product patterns, noises, and smell which are known as non-traditional trademarks. This court ruling declares that the stitching design can be trademarked and leaves open the possibility of obtaining trademark registration for unusual or non-traditional marks.

Author: Tashvita Yardi, A Student of N.B.Thakur College, Nashik, in case of any queries please contact/write back to us via email to chhavi@khuranaandkhurana.com or at  Khurana & Khurana, Advocates and IP Attorney.