A Tug of War Between the Bull and the Bear : Convergence of IPR and Competition Law

On Wall Street brokers call an optimistic market with rising share prices a “bull” market, and the slow, downward movement of the market as a “bear” market. The idea is that both are necessary, that the conflict between the two keeps the economy in balance. Coincidentally, this is analogous to the intertwined interdependent relationship between IPR and Competition Law. While IPR functions to resound innovation and art, by offering exclusive monopoly rights to creators, thereby competition. On the other hand, competition law performs the exact opposite by increasing market equilibrium and increasing competition. However, my research focuses on analysing the issues arising out of the convergence of Intellectual Property Rights and Competition Law, and arriving at a detailed overview and research on how the conjunction of IPR and Competition Law can in fact be construed as Complementary Policies, harmonious in its modus operandi. I aim to answer the question of whether such a convergence of opposite forces is in fact destructive or constructive? 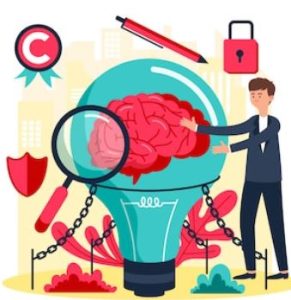 Objectives of IP and Competition Law – The inception of Conflict

Intellectual Property Rights enable the accumulation of monopolies by granting an exclusive right to the owner of such a creation, thereby barring third-party access to the same. Whereas, competition Law seeks to ensure fair competition by prohibiting trade practices which cause adverse effects in the market. While IPR seeks to protect individual interests, competition law protects the market by increasing access to it. There exists an inherent conflict between the two disciples. Therefore, in economic theory, a particular work, product, or invention protected by intellectual property law cannot be freely sold or distributed just for commercial reasons. Intellectual property law avoids the normal dynamics of competition by granting control—or monopoly—over a specific item . Simply put, intellectual property produces monopolies, but antitrust law actively works to prevent or combat the same.

The Interface between Competition Law and IPR

The Competition Act, 2002 (hereinafter referred to as “the Act”) stipulates anti-competitive agreements whilst also preventing a blanket exception to Intellectual Property related agreements, especially concerning compulsory licensing and parallel imports . The act seeks to regulate the abuse of dominant position in the market whilst actively promoting innovation . The application of the act to IPR cases are not limited or barred.

It is settled law that the right of anybody to “impose reasonable conditions, as may be necessary to protect any of his rights” is unaffected by Section 3(5) of the Act . As a result, the owner of an intellectual property cannot set any conditions that he sees fit . Section 3(5), which allows for general exceptions in cases of imposition of reasonable restrictions for protecting intellectual property rights granted under various legislation, in fact limits the capacity to do so. Therefore, the rules under Sections 3(1) to 3(4) of the Act will not be applied if the licensor has placed a reasonable restriction for preserving any of the rights recognised by any of the statutes of IPR recognised under Section 3(5) of the Act through an agreement. The CCI correctly noted that intellectual property rights have no absolute superseding effect on competition law . Further, it enumerated that the language employed in Section 3(5) of the Act makes it apparent that the non-obstante clause’s scope is not absolute and that the right holder is only excluded from the strictures of competition law to prevent infringement. Further, CCI is well within its jurisdiction in handling competition disputes involving IPR . Additionally, it was made clear in Kingfisher v. Competition Commission of India that all issues raised before the Copyright Board might also be addressed by the CCI.

Considering the provisions of the Act and the Indian Common Law jurisprudence, it appears that intellectual property rights are not completely immune from the purview of the Competition Commission of India.

With the advent of globalisation, a developing country like India has responded by expanding access to the market, removing barriers, and resorting to liberalisation. As advantageous as this may be, the issues arising out of the conjunction of IPR and Competition law is only bolstered due to the obsolete nature of the competition policy. Although the Competition Act of 2002 broadly embraced the goals of intellectual property laws by sustaining to a certain extent the dominance attained by an individual due to such rights, a balanced strategy is needed to harmoniously create both statutes. There is a pertinent need to shift the paradigm of disciplines regulating competition from restricting monopolies to promoting competition instead. Such that, competition law continues to be a critical means of resounding innovation and economic growth.

The Bridge between the Two: Destructive or Complementary?

The analysis of IP and Competition Law and policy would be futile if they are attributed solely to the direct advancement of innovation and the direct promotion of competition respectively as the raison de’etre of their conflict. Instead, the two disciplines must be perceived as laws encompassing opposing aims with harmonious objectives. They are symbiotic in that they indirectly serve each other by fulfilling their respective functions.
Although these laws are antithetical to one another, the dichotomy presents itself as two divergent paths for achieving a concurrent objective. To put it simply, the absence of a system governing IPR would jeopardise the presence of competitors in the market and the very existence of competition. The issue to be addressed, therefore, does not concern the existence of IPR alongside competition law, but should be viewed from the vantage point of construing a legal system wherein IP rights are implemented ins such a manner to promote a healthy competitive environment.

Competition Law and IPR function in the pursuit of promoting innovation and consumer welfare. In terms of consumer welfare, IPR offers an exclusive right thereby encouraging people to invest in goods that society actively needs; and competition law offers consumers the best goods and services at an affordable price – both achieve the goal of consumer welfare through diverse approaches. Moreover, the introduction of new inventions leads to healthy competition at the macroeconomic and microeconomic levels, which in turn spurs more incentives for innovation and, ultimately, leads to the country’s economic progress. Therefore, policymakers need to strive to strike a balance between the two to achieve optimum growth and opportunity.

It is crucial that these laws are applied efficiently such that antitrust laws do not encroach unnecessarily upon IPR by preventing owners from gaining profit from their inventions. Thus, these laws complement each other and make a case for better cooperation between competition and IP regimes.

IP Laws cannot be construed, designed, and applied independently of other legal disciplines, particularly competition law. Defining the correct balance between competition and IPRs is an objective to be achieved through a diversity of policies and regimes by strengthening competition laws so as to regulate, inter alia, possible abuses emerging from the acquisition and exercise of IPRs. Empirical data suggests that a more robust, and stronger enforcement of IP rights along with the allowance of its frequent use substantially reduces anti-competitive practices.

There is undeniable scope for both these legislations to work in tandem with one another. Since both IPRs and competition laws seek to promote innovation, competition, and improved consumer welfare.

Author: Sanjana Arun,  in case of any queries please contact/write back to us via email to chhavi@khuranaandkhurana.com or at  Khurana & Khurana, Advocates and IP Attorney.