Advertisements form an important factor of the marketing strategy of an organization. It is common that there is competition in the market and hence, certain firms tend to disparage the goodwill of another company. In common parlance, comparative advertisement means advertisement of a particular product by comparing with the competitor’s product for showing why it is superior. 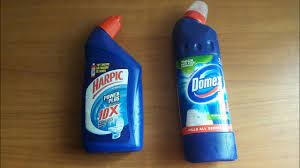 In the recent toilet cleaner advertisement, Hindustan Unilever’s (HUL’s) Domex directly named Reckitt’s Harpic, evidently claiming former’s superiority on the specific dealing with a situation of funk. The commercial is shot in a supermarket set featuring actress Divyanka Tripathi and Revathy, wherein the consumer is forced to question her toilet cleaner purchase when her son questions her choice of Harpic when she picks it up.

HUL stated that its new “Domex Fresh Guard toilet disinfectant cleaner” is composed of surface-modifying particles that tend to leave a protective layer on the toilet surface to avoid the accumulation of bacteria, water and stains. In the European market, Domex is leading in certain hygienic and cleaning products. However, in the Indian market, the consumers tend to trust Harpic more as it has more than 70% share whereas Domex only owns 7% share in the market.

Justifying the improper advertisement, the Executive Director; VP, Home Care of HUL (South Asia), Ms. Prabha Narasimhan stated that their communication was aimed at giving consumers the evidence to make informed decisions determined by their own technology and research.

Comparative Advertisements and Product disparagement are sensitive subjects to the manufacturers and producers of goods and services. The former is a strategy used by companies to represent their products as superior in comparison to the competitor. When the comparison is misleading and/or derogatory, it is termed as the latter. With the increase in the importance of advertising, there is limited vigilance on the marketing strategies. Such an advertising is permissible if it meets certain basic conditions as provided under the thumb rules by the Advertising Standard Council of India in its Code for Self Regulation of Advertising Content. For instance, as long as the advertisements are evidently “in the interests of vigorous competition and public enlightenment” and there is utmost clarity, there is likely to be little or no problem. On the other hand, Section 29(8) of the Trademarks Act, 1999 lists down certain activities that constitute infringement. The provision states that infringement takes place if the advertisement in question:

Thus, the most important factor is that the comparison between the products should not mislead the consumers about the product that is advertised or the one with which it is compared. The advertisement should not attack or discredit the products.

Background of the case

The case was filed by Reckitt Benckiser, manufacturer of Harpic before the hon’ble Delhi High Court, against HUL for injunction under Order 39 Rules 1 and 2 of the Civil Procedure Code to restrict the HUL from disintegrating the reputation of the trademark ‘HARPIC’ and from broadcasting the impugned advertisements. One advertisement depicted a child questioning his mother about the choice of HARPIC whereas the other advertisement directly made a comparison between the two products which was allegedly defamatory. The other advertisements used an identifiable Harpic bottle and the depiction that it is just an ‘ordinary toilet cleaner’. HUL herein clearly denied any reference to the plaintiff’s product.

Section 30(1) of the Act justifies comparative advertising, authorizing the use of a registered trademark for the purpose of identifying the goods or services of the competitor provided that the use must only be according to honest and fair-trade practices with bona fide intent to take the advantage of reputation.

The Madras High Court in Consim Info Pvt Ltd vs. Google India Pvt Ltd. held that certain requisites must be met to pass for the defense of ‘nominative fair use’ as provided below:

The Court relied on certain judgments and reiterated that in comparative advertisements, one must not make misleading contentions or claims that may defame the goods of the competitor and make itself superior to the competitor. However, the Court also stated that within this gray area, the intention of the firm making the advertisement must be assessed to make a viable decision.

The Court adopted an approach to pronounce a win-win judgment for both the parties. In the advertisement, wherein a boy questioned the choice of his mother, the court stated that it was mere comparison without any intention to disparage the plaintiff’s product. However, the advertisement is now taken down by the defendant. In the author’s opinion, the advertisement clearly disparages the product’s reputation. Questioning one’s choice in one way or the other implies that the product is not that effective. If Domex intended to depict that it has launched a new and advanced product, the marketing strategy and content of advertisement could have been different. Therefore, a flaw in the judgment can be identified.

While comparative advertising is not unlawful in and of itself, advertisers should ensure that the foundation for comparison is fair and factual and are not chosen to provide themselves an unfair advantage, as we wait for the final resolution of this ongoing issue. In such comparable advertising, other marketers must not be unfairly disparaged or ignored. Although hyped-up advertising may be permissible, it cannot transgress the gray areas of permissible assertion, and if it does so, the advertiser must have some reasonable factual basis for the assertion made.

The Court in many cases also stated that the consumers have the right to free flow of the information and hence, the marketeers must do the same to aid consumers in making informed decisions.