Sports have always been a component of human culture. Modern sports have been recorded as long back as 2000 BCE. The inaugural Olympic Games in Greece in 776 BCE aided the global development of competitive sports. Sports have grown in prominence throughout time. For example, when the Persians invaded Greece, Athens had problems assembling its army since many were occupied participating in the Olympics. Sports have evolved greatly from their ancient origins, with several new sports emerging in the last century. As information has become more easily accessible (from newspapers to internet), sports have gained in popularity. Modern sports have become a platform for marketing, merchandising, franchising, and brand promotion. 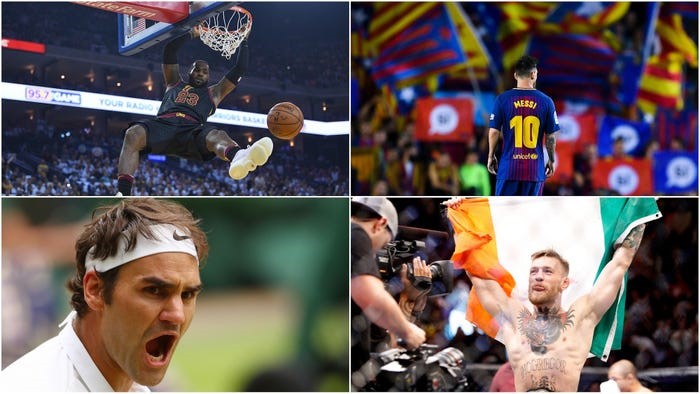 Players that win awards in their sports become famous sports celebrities with a significant following in both their sports and personal life. Their popularity among the public is equivalent to a celebrity. Many great athletes from the past and present remain popular today so much so that their name becomes synonymous with being the best in their sport.

The main difference between current sports regime and that of a few hundred years ago is that money now plays a huge part in sports. Today, sports merchandise, franchising, and branding are enormous. Firms are willing to spend significant sums to be connected with a sporting event or a sportsperson. For example, Vivo, a Chinese smartphone maker, agreed to pay the BCCI 2,199 crore rupees over 5 years to have its name connected with the major cricket sporting event, the Indian Premier League (IPL). Companies today, thus, aim to improve their brand value by using athletic events and having athletes endorse their products. In this regard it is important to ponder over the phrase “Football is not only a game, but also a product,” said by FIFA’s ex-president Sepp Blatter.

The term ‘brand value’ refers to how much an individual would pay in addition to the price of other brands. Brand value has helped athletes like Michael Jordan, Sachin Tendulkar, Sania Mirza, and others to connect with a wider audience, including people who do not even follow their sports. The main purpose of creating a brand is to enter into corporate endorsements which can be a major source of money. Famous athletes like Roger Federer and Tiger Woods make most of their money from such endorsements.

celebrities and athletes may also trademark their catchphrases, signatures, names, or even the initials of their names. Sportspeople may also benefit on their brand value by trademarking their celebratory actions. In simpler terms, we can understand it this way that each player celebrates his victory in his own peculiar way which is unique to him. This celebration can include dancing, gestures, and slogans. A player’s celebration style frequently reveals a lot about their personality which helps the people understand more about the players and thereby builds their brand value.

Having seen the prominence of brand value in the sports industry, it is pretty evident that today’s athletes are brands in themselves. Thus, technically they too require brand protection. This is because often individuals try to cash in on great athletes’ fame and popularity. They do this by releasing merchandise featuring their faces, names, autographs, jersey numbers, or other identifying marks. This gives the impression that the athlete is linked with or has endorsed the product. Thus, It is now crucial for sportsmen to trademark some facets of their character. The famous player Lionel Messi has over 76 registered marks to his credit for jewellery, apparel and sporting equipment. Cristiano Ronaldo’s name, initials, and number are trademarked as CR7 and CR9. The Indian cricket legend Sachin Tendulkar has also trademarked both his name and signature.

Throughout contemporary sports history, sportsmen have created and popularised distinctive techniques on the field, from silly dances to simple hand motions to attract their supporters. Most of these moves are however unregistered. To be eligible to trademark a gesture or an action, one has to be able to establish that the act is so distinct that it can only be reasonably assigned to the particular individual or brand.

Usain Bolt’s celebratory gesture, the “lightning bolt”, is an example of such a distinctive style, with his legs stretched and his arms and fingers pointed diagonally upwards.

Many football players have also trademarked their celebrating dances as a ‘device’ or an image mark. Gareth Bale, the famous Welsh player, has trademarked his “Eleven of Hearts”  celebration motion. The mark is used on items such as hats, purses and jewellery.

Even while some sports personalities have trademarked their celebrating actions, the legal fight is difficult and challenging. A celebratory motion for a sportsperson must meet three criteria. If not satisfied, these prerequisites might act as obstacles.

Firstly, graphical representation is required. This can be done by either explaining the action in detail or by illustrating it using a photo or drawing. Criteria such as clarity, precision, durability, accessibility, and the objectivity of such a graphical depiction may also be taken into account while trademarking any particular celebration gesture.

In Qualitex v. Jacobson[1], the issue revolved around the trademarking of the colour of a brand’s dry-cleaning pads. The case was moved to the US Supreme Court, which denied the colour’s trademark application but held that in some situations, a colour can also fulfil the legal standards for a trademark. A source-distinctive ability, rather than a phrase, symbol, form, colour, or aroma, is what permits a mark to be registered as a trademark.

Intangible markings like scent and sound are difficult to describe graphically for trademark registration. Noting the chemical formula of the scent does not constitute registration. Unusual marks must be described so precisely that no other sound or scent can be mistaken with the one seeking trademark registration. Descriptions of this unusual mark might be confusing. Likewise, to trademark a sportsperson’s action, a description of the mark must be so detailed that it cannot be mistaken with a similar or identical move/action of any other person.

In India too such a graphical representation is required under Rule 25(12)(b) of the Trademarks Rules, 2002.

For a celebration move to be registered as a trademark, it must also be able to demonstrate its originality and individuality among other similar goods or services. The action should differentiate one good or service from another. A trademark may only be registered if the celebration move is so distinctive that it can only be attributed to that sportsperson and no other person or brand. It must be proved that the relocation will not cause any possible misunderstandings with other items or services in the same trademark classification. The second condition for trademarking a sportsperson’s celebration move is uniqueness that may be used to identify the source.

Undistinctive marks that cannot discriminate between products or services are not eligible for registration under Section 9(1)(a) of the Indian Trademarks Act, 1999. The proviso to Section 9(1) states that a mark cannot be rejected registration if it has gained distinctiveness from usage.

In Imperial Tobacco Co. Of India Ltd. vs Registrar Of Trade Marks[2], the Calcutta High Court had to determine if the applicants’ mark ‘Simla’ on cigarettes had gained uniqueness or not. While dismissing the registration application, the Court held that uniqueness in commerce is a criterion for registration.

Trademark protection extends to everything that can be used to identify a specific item or service. Sports actions to be trademarked, should be able to identify a specific commodity or service linked with the motion. A trademark cannot protect a motion that cannot identify the source or origin of goods or services. But it is this third criteria that makes trademarking a sportsperson’s celebratory gesture difficult. This is specifically owing to the apparent non-attachment of the celebratory move to a good or service.

However, modern problems require modern solutions. Modern technologies can assist us solve this question. For example, a video of the celebratory gesture may be used during a product or service commercial to help customers associate the move with the product or service. On an e-commerce website, a video may be linked to a product, such that when a customer clicks on the product to view or purchase it, the congratulatory video plays.

Author: Mahak Agrawal – a student of Symbiosis Law School (Nagpur), currently an intern at Khurana & Khurana, Advocates and IP Attorney, in case of any queries please contact/write back to us via email chhavi@khuranaandkhurana.com.