The legendary Amitabh Bacchan starrer “Sholay” is apparently one of the most popular and recognized movies of Bollywood. The instances and the characters of the movie have been engraved in public memory and have a wide fanbase. Over the years the movie has earned the status of being the most iconic film of all times. At the outset it is necessary to mention that all the concerned legal rights of this 1975 Ramesh Sippy directed motion picture lies with Sippy Films Pvt. Ltd. and Sholay Media and Entertainment Pvt. Ltd. 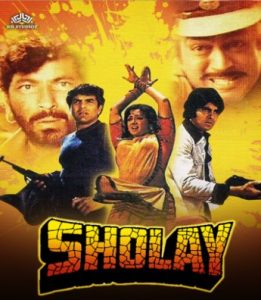 Back in the 2000, Sippy Films Pvt. Ltd. and Sholay Media and Entertainment Pvt. Ltd. unearthed that Yogesh Patel and certain other associated persons (hereinafter referred to as the infringers) had made a website with the domain name “sholay.com” and were also looking forward for its trademark registration in India as well as the United States. Not only restricted to the domain name, they were also employing distinctive instances, scenes and characters such as references of “Gabbar” and “Thakur” to attract customers under the guise of the website.

Evidently, the scenario is a textbook example of trademark infringement and passing off. In this backdrop it is pertinent to first brood upon what a trademark is and how can it be infringed. A trademark can be described as any phrase, slogan, symbol, peculiar design or word which distinctively identifies a product or service to be associated with a particular organization or company.[1] With regards to “Sholay” in particular, let us understand it this way, that when we casually refer to the word “Sholay”, we instinctively associate it with the movie Sholay and assume that the person uttering the word is most probably referring to nothing but the movie. Thus, as per the universally recognized definition of trademark, the word “Sholay” is capable of distinguishing the movie with any other probable thing. As a corollary to the above elaboration, trademark infringement happens when any other individual or organization endeavors to use an identical or a reasonably deceptive mark similar to some other already existing mark in the market.

In consequence to such an apparent trademark infringement, the right holders, i.e., Sippy Films Pvt. Ltd. and Sholay Media and Entertainment Pvt. Ltd were left with no other alternative than to knock the doors of the court. Here, the infringers argued that Sholay being a film title is not entitled to trademark protection and thus, the element of deception does not come into picture at all and that Sholay being an ordinary dictionary word meaning ‘burning coal’, cannot be protected under the Trademarks Act. The Trademarks Act, 1999 clearly mentions certain grounds on which trademark protection can be denied. One such ground is the want of distinctiveness.[2] Thus, evidently, in order to get a trademark registered for a movie title or character, it must be proved to have earned a peculiar distinctiveness in the form of a secondary meaning which can be acquired as a result of extensive popularity amongst the masses. Thus, what actually facilitated the registration of trademarks for “Sholay” and “Gabbar” was not the inherent distinctiveness but the acquired distinctiveness whereby people exclusively link these names to the movie and its makers. Additionally, in an action for infringement, it is pertinent to establish the fact that the said infringement would lead to a likelihood of association of the mark with some other organization or individual, by any reasonable viewer. Thus, in general parlance, the more welcomed a movie is, the more stringent is its IP protection.

The Delhi High Court’s ruling in this case of Sholay Media Entertainment and Anr. V Yogesh Patel and Ors.[3] was based on similar lines. The Hon’ble court here observed that Sholay is one of those movies which has made its way beyond any ordinary motion picture. It has proved to be an epochal film which has moved yonder than being just a usual word. At the same time the court also settled the position that titles and characters are capable of being trademarked and Sholay is no exception. The IP rights of Sholay has, in fact, already been acknowledged by the court in the 2015 judgement of Sholay Media and Entertainment Pvt. Ltd. and Anr. v. Parag Sanghavi and Ors.[4] Thus, the court, here, was of the opinion that the use of the domain mane ‘Sholay’ would lead to a clear deception since it does not just connote a description but moves further ahead to suggest an immediate association with the movie and its makers. The fact that the internet has become one of the primary modes of communication and can be accessed by anyone from anywhere in this modern era also cannot be ignored.

Consequently, based upon the aforesaid observations, the Court ordered the infringers to hold back from using the domain name ‘Sholay.com’ and impede from making any references in the form of any logos, clippings, marks or images to the characters to sell their products and services. The court also decreed a sum of 25 Lakhs in favor of the right holders as compensation for the damages caused.

When it comes to trademarks specifically, the regime does not provide sufficient protection to movie titles and characters in as much as it can be seen that various movies in the Hindi Film Industry borrow and copy the storyline, plot, etc. from other Hollywood or south Indian movies. Quite surprisingly Sholay itself has several elements from the Hollywood movie ‘Magnificent Seven’. Thus, it can be gathered that strengthening IP protection in the cinematography sector would essentially lead to more creativeness and originality, especially in the Indian film industry. Rationally also, others cannot be expected to brood over the name and fame acquired by the makers of any particular movie. It follows that the makers, who spend magnificent amount of time and money over making a movie stand out, expect to earn certain commercial benefits, which cannot be denied. Thus, it only makes sense if the rights of the makers are sufficiently protected not just on paper but also in practice.

Author: Mahak Agrawal – a student of Symbiosis Law School (Nagpur), currently an intern at Khurana & Khurana, Advocates and IP Attorney, in case of any queries please contact/write back to us via email chhavi@khuranaandkhurana.com.