Defcon Patent is Granted For Its Lockdown Device

Commercial stage manufacturer and distributor of innovative lockdown device, Defcon patent is granted For Products LLC announced that the United States Patent and Trademark office (USPTO) patent is granted For the company U.S. Patent No. 11214986, entitled “Emergency Deadbolt Device.” The USPTO also issued a Notice of Allowance for the Company’s U.S. Patent Application No. 16/139,827 entitled “Emergency Deadbolt Device,” and an “Issue Notice” indicating the patent publication date of 1/4/2022. TeacherLock and SaberLock are some of the product which Defcon commercially manufacture and distribute. 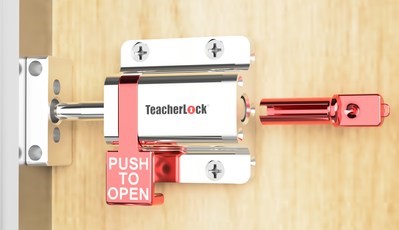 “We are pleased that the united states patent and trademark office recognizes the novel advances made by Defcon Products, LLC.  The addition of this patent is granted For the notice of allowance strengthen our intellectual property position and highlights our commitment to innovation in advancing the ability of schools, companies, hospitals, and places of worship to quickly lock down and egress, dramatically improving occupant safety,” commented Salvatore Emma, Vice President and Founder of Defcon.

The unique functionality that the patent is granted For pertains to allows the locking of the door at a faster pace and with more efficient manner in an emergency. This will prevent the access to intruders, shooters or any unauthorized person and delay it further. The patent generally allows for the locking mechanism, quick egress, and proprietary “bullyproof” key as well as several claims and species relating to potential wireless communications applications of the device.

The innovation by Defcon is an important one and it directly relates to the safety of life. It is for this reason that USPTO recognizes this innovation and Defcon knowing the importance actively wants to protect its invention through patenting. The company also have a pending patent at the USPTO which substantially add upon the IP portfolio of Defcon.

TeacherLock and SaberLock is also a product of Defcon where these two have been designed to enable the occupant to lock down a classroom and workplace under stress. No such special training is required for both locking and egress where both are intuitive, having a fast and conspicuous exit. Due to its features and being entirely mechanical and easy to install, both the devices are protecting classroom and workplace across USA.