Granting Geographical Indication Tag To ‘Temple Prasadam’: Violation Of The Law Of Land? (Part I)

This is the Part I of the two-part blog on the issue that emerged that in 2009 after the ‘Tirupati Laddu’, the sacred Temple Prasadam offered at the renowned Tirupati Venkateswara Temple was granted a Geographical Indication Tag.

In 2008, Tirumala Tirupati Devsthanams (TTD) the trust which regulates the Sri Venkateswara Temple, Tirupati applied for GI registration of the temple’s sacred Prasadam, the Tirupati Laddu. It is one of the most visited religious places across the globe and each day there is a pouring crowd of devotees who thrive to secure the holy food. TTD has been battling with the growing menace of hawkers who sell counterfeit laddus despite several vigilance measures and to curb this menace, TTD had filed for GI registration of the Prasadam. It was the very first time that a religious institution was applying for GI registration of its Prasadam and as a result it had attracted a lot of criticism. 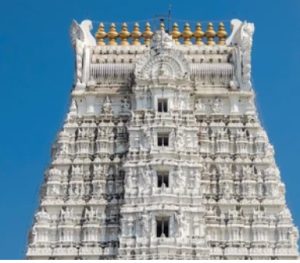 Hereinafter referred to in the Article 22 of TRIPS Agreement, 1995 “Geographical indications are, for the purposes of this Agreement, indications which identify a good as originating in the territory of a member, or a region or locality in that territory, where a given quality, reputation or other characteristic of the good is essentially attributable to its geographical origin.”

Section 2 (1) (e) of The Geographical Indications of Goods (Registration and Protection) Act, 1999 also states the definition of Geographical Indication which is like that mentioned in the TRIPS Agreement 1995 but with an addition that in case where such goods are manufactured goods one of the activities of either the production or of processing or preparation of the goods concerned takes place in such territory, region or locality.

According to the provisions of this Act, the Geographical Indication Registry has been established by the Government of India at Chennai for registration of GIs.

Darjeeling tea was the first product to get a GI Tag in India in 2004 and presently there around 365 products which have been designated a GI Tag.

The basic objective behind assigning a product with a GI Tag is to provide rights to the producers to make use of exclusive signs for distinguishing their products from other competing products in the market. This right therefore protects the livelihood of craftsmen, artisans and other native communities who engage in producing and manufacturing the products unique to geographical locations and thus, helps in the upliftment of backward and marginalized sections of the region. Hence, a Geographical Indication tag is a matter of pride to both the manufacturer and consumer as a symbol of excellence and a sense of guarantee or uniqueness and safety of rights to the parties involved in the production.

THE STORY OF TIRUPATI LADDU

A BRIEF ABOUT THE TIRUPATI LADDU

laddus are made daily and the annual revenue from sales is more than Rs. 2 Crores. The sacred Prasadam is prepared by combining boondi with sugar syrup and pure cow ghee and consists of other ingredients like diamond sugar candies, cashew nuts, almonds, raisins, cardamom etc. These laddus are prepared in a specialized kitchen known as the Laddu Potu and per day approximately 10 tons of gram flour, 10 tons of sugar, 700 kg of cashew nuts, 150 kg of cardamom, 300 to 500 liters of ghee, 500 kg of sugar candy and 540 kg of raisins used to prepare the laddu. A workforce of 620 cooks is employed at the Laddu Potu and they are called as Potu Karmikulu.

The Tirumala Tirupati Devsthanams (TTD) is the trust that manages the Sri Venkateswara Temple and administers the production of the sacred laddu. TTD in March 2008 applied for GI certification of the famous laddu at the GI Registration Office in Chennai. TTD in its GI Application while stating the characteristics of the laddu mentioned that highest quality of raw material is procured for the production and a variety of extraordinary skills are required for each stage of laddu making. The report also contained that a few laddus are offered before the main idol in the temple shrine and after the Puja they are taken to the Potu where they are mixed with the ingredients to make more Laddus. This ensures that the food offered to the Lord as Naivedhyam gets mixed with the rest of the Laddus and thus, according to TTD, the Laddu, derives its sanctity, reputation and uniqueness from its being offered as Naivedhyam to the Lord. After the panel of experts appointed by the Registrar of Geographical Indications comprehensively examined the credibility of the application Tirupati Laddu was designated the status of a GI on September 15, 2009.

A GI Tag is granted to a product under the GI Act, 1999 only if the product is manufactured or produced in a specific geographical location wherein the quality or characteristics of such product are necessarily obtained from its geographical origin. For instance, the GI tag given to Darjeeling Tea is absolutely justified because the tea is unique from all the various types of teas grown in other regions of the world and various geographical factors contribute to its uniqueness like sloping terrains, climate, type of soil and rainfall. So, one can obviously ponder upon the distinctiveness of the Tirupati Laddu because the ingredients boondi, almonds, ghee, sugar are very commonly used across the country for making laddus

Additionally, there is no characteristic that the laddu has obtained due to its geographical origin. However, the TTD has always argued that the Laddus derive their sanctity from being offered as Naivedhyam to the Lord, a uniqueness which sets them apart and makes them distinct from all other Laddus produced in Tirupati.

According to the TTD, many street vendors and hawkers in and around Tirupati town were preparing and selling such similar fake laddus and despite multiple vigilance committees being in action, they were not successful in curbing this problem. Therefore, in an attempt to protect the sanctity of the SriVari Laddu, TTD decided to seek legal protection for it. While it is very clear that the Laddu acquires it uniqueness due to its association with the Temple but precisely this unique feature alone is not sufficient to grant a GI Tag. GI protection bestows exclusive rights upon all the producers of that particular geographical area but in this case, only the TTD has secured these rights and not the other laddu producers in the town. Moreover, it a well-known fact that this laddu brings in huge revenue which goes directly into the pockets of TTD and much evidently this has become a form of faith trading which has widened into a very rewarding source of income for this religious shrine.

The Part II will discuss about the criticism that the GI Tag faced and will also analyse whether the granting of GI Tags to such similar Temple Prasadams commercializes and violates the religious beliefs of the people.

Author: Rushika Bakshi – an intern at Khurana & Khurana, Advocates and IP Attorney,  in case of any queries please contact/write back to us via email vidushi@khuranaandkhurana.com