A Comparative Study Of Judicial Approach Between India And U.S.A.

Trademark protection legislation was enacted to give trademark owners exclusive proprietary rights, a monopoly over their trademarks, and safeguard the public’s goodwill. Trademark protection was designed to prevent the sale of counterfeit goods under a well-known brand name, but when these owners go above and beyond their legal rights to defend their mark, the term “trademark bullying” is used. The USPTO defines trademark bullying as “the conduct of a trademark owner using its trademark rights to harass and intimidate another business beyond what the law would fairly be construed to allow.” 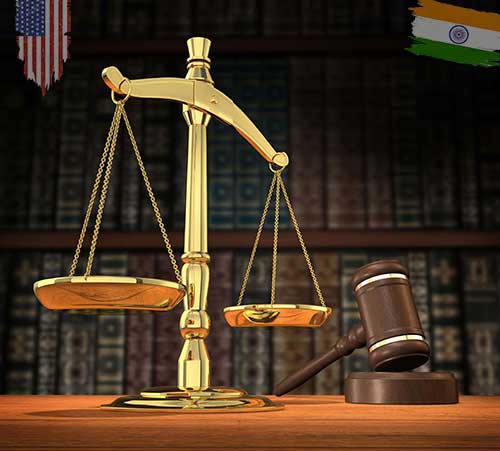 When large corporations aim to eliminate competition from markets, they have been found to follow a similar pattern. They send out a standard cease and desist letter that includes legal threats of trademark infringement and dilution. They also indicate that they have had success litigating other businesses that use identical trademarks, and then they file an opposition or rectification action against the small business. The effect on small businesses that lack financial or legal backing is that they seek a settlement in which they are asked to remove their marks, which is accepted by the small businesses. Because of the litigation, small businesses have to pay a lot of money for rebranding, removing products from the market, and losing their reputation. When the trademark owner becomes aggressive in protecting his trademarks, eventually the lines between actual infringement and absurd allegations blur.

This article will examine the notion of trademark bullying, as well as how huge firms interfere with small businesses’ brand building and IPR registration processes, and whether this leads to oppression and bullying of such small organizations.

The danger of such misappropriation had been anticipated by Indian legislators, who established a suitable response under section 142 of the Trademarks Act, 1999, which specifies the law against false legal threats. The provision reads as follows:

“Where a person, by means of circulars, advertisements or otherwise, threatens a person with an action or proceeding for infringement of a trademark which is registered, or alleged by the first-mentioned person to be registered, or with some other like proceeding, a person aggrieved may, whether the person making the threats is or is not the registered proprietor or the registered user of the trademark, bring a suit against the first-mentioned person and may obtain a declaration to the effect that the threats are unjustifiable, and an injunction against the continuance of the threats and may recover such damages (if any) as he has sustained, unless the first-mentioned person satisfies the court that the trademark is registered and that the acts in respect of which the proceedings were threatened, constitute, or, if done, would constitute, an infringement of the trademark.”

An injunction might be given in the aggrieved party’s favor to prevent the other person from making further threats and to recover damages. Only those whose trademarks have been registered are eligible for this action. The Copyright Act of 1957, the Patent Act of 1970, and the Designs Act of 2000 all provide provisions for this.

In such circumstances, Indian courts have always made rulings on a case-by-case basis. For example, in the instance of Bata India Limited vs VitaflexMauch GmbH[2015], the plaintiff filed a lawsuit against the defendant to prevent them from making unfounded threats of legal action. The fundamental issue before the court was whether the defendant’s legal notice constituted a legal threat and whether the plaintiff was entitled to an injunction and damages. The defendants were directed to refrain from issuing any further false threats by the Delhi High Court, which held that the legal notice amounted to a threat that was unreasonable.

In this scenario, the likelihood of BigBasket’s asserted confusion between their company and that of the start-up Daily Basket in terms of mark utilization appears to be slim. Apart from the term ‘basket,’ there is no similarity between the two marks, and the color, font, visuals, and overall mix of brand names are vastly different. The confusion should be real and proximate, not far away, to the point where both marks are indistinguishable to the registered owner’s clients. That is to say, secondary distinctiveness is required. The use of a common word like ‘basket’ in a different context, on the other hand, does not imply a secondary distinction.

Despite the fact that India currently has a framework in place for such threats, the statute does not precisely describe what constitutes a groundless or baseless threat. However, Indian courts are clear on a few elements, such as whether the marks are actually similar and cause confusion, whether international companies have an intention to bring their product into the country, first to use over first to file, and so on, which have been taken into account when determining whether the same is to be considered bullying or infringement. The Indian judiciary did not hesitate to penalize MNCs and other major enterprises when it became clear that the infructuous cease and desist notices being issued to local firms were harming them erroneously and illegally.

While trademark bullying occurs less frequently in India, it occurs significantly more frequently in the United States. The Trademark Act’s text does not explicitly prohibit such a mercenary focus. It specifies that if a registered mark is violated, the plaintiff is entitled to recover the following:

The following are some recent examples in which US courts have taken a new look at the concept of trademark bullying:

In a similar lawsuit of Monster v. Vermonster [2009], Hansen Beverage Co., the maker of the well-known energy drink “MONSTER,” sent a cease-and-desist notice to Rock Art Brewery for using “Vermonster” to sell its produced beer. Rock Act Brewery was a small business that only sold beer in a few states across the United States. According to Hansen, the terms Vermonster for beer and Monster for an energy drink are likely to be confused.

Rock Art was ordered to comply with the notice despite the fact that the marks were wholly dissimilar and unique in their own way; however, the owners of Rock Art stood up to the bullying and released a public statement, as well as begin selling and marketing their goods. They also took to social media which persuaded Hansen to back down and come to a settlement.

Although the dispute between Apple and Prepear has yet to be resolved, it is clear that both logos are distinct, as are the goods and services offered, so any man of average intelligence should have no trouble telling them apart. However, the factors to consider when deciding whether or not there has been a credible infringement or bullying are self-evident.

With a lack of clarity under the law, fewer precedents for defining trademark bullying, and fewer resources available to smaller businesses, public opinion and social media support have become a typical way out for these businesses, as evidenced in the examples above. Unlike the USPTO report, which defined “trademark bullying” and what constituted aggressive behavior, Indian trademark rules have yet to do so. Furthermore, the terms “baseless and groundless” threats under section 142 are less defined, making the distinction between a bona fide act and a bullying act murky. Furthermore, despite the fact that Section 142 authorizes the injured party to seek an injunction and damages, the awful legal proceedings continue to obstruct the process. It’s also pertinent to remember that social media shaming could lead to a larger defamation action in some situations. As a result, in addition to the need for legal clarity, the merits of the case must be taken into account while evaluating such cases. In order to achieve a fair conclusion, the cliché of a “big business giant abusing its position” should be abandoned. As a result, the merits of the case, registration and prior use, history of infringement suits filed by a company against its competitors, similarity in disputed marks, and areas of business in which the parties engage must all be taken into account in order to reach a balanced conclusion that ensures the enforcement and exceedance of the right separate. The trademark act provision’s principal purpose is to ensure that small businesses and local businesses did not lose access to what they were legally entitled to. However, there are steps that may be taken to help alleviate the problem, such as donating funds to smaller organizations like legal aid camps, raising awareness, and law firms taking the initiative and processing more pro bono cases, among other things.