IP Waiver and Its Applicability in The Contemporary Times: Part II

As discussed in part I of the blog, an IP waiver “removes” intellectual property protection for a limited time. India and South Africa had come up with an initiative that proposes that countries have the option of not applying patents and other intellectual property related to health products and technologies, such as therapeutics, diagnostics, equipment, vaccines, and other materials or components, as well as “their methods and means for the prevention, treatment, or containment of COVID-19”. As a result, the COVID-19 epidemic has reignited a long-running debate about how to strike the right balance between private profit and public health. The arrival of vaccines against Covid-19 provides optimism for putting an end to the epidemic, which has claimed the lives of about 2.84 million people so far. Inoculating millions of individuals over the world, on the other hand, would necessitate large vaccine production and equal distribution. Many experts and campaigners believe that intellectual property restrictions impede impoverished countries’ access to crucial medicines, vaccines, and other materials. On the other hand, it is also argued that the IP rules are necessary to motivate drug makers. In the midst of the pandemic, countries are debating whether or not to suspend WTO regulations, which we call a waiver of IP.

A DEBATE BETWEEN DIFFERENT COUNTRIES 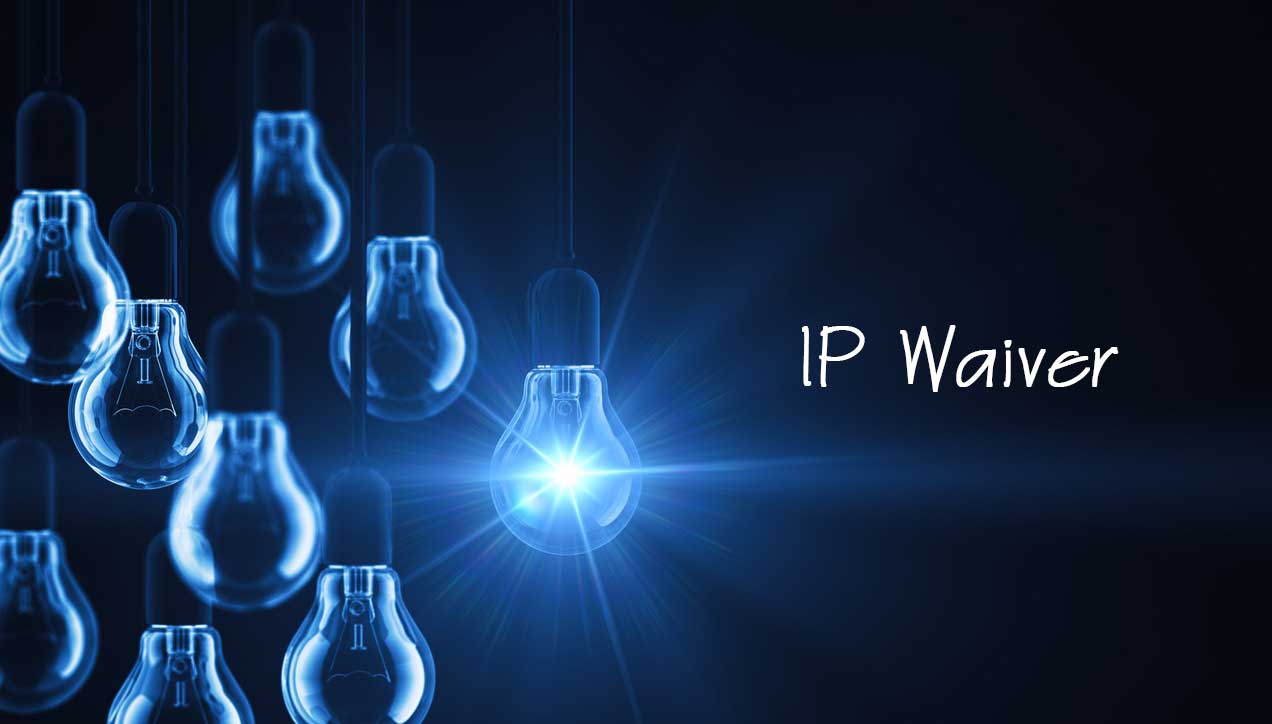 The World Health Organization (WHO) has urged nations to prioritize human rights in pandemic response efforts, including universal access to COVID-19 vaccines, treatments, and health technologies. They are widely recognized as public health goods, and their availability is a component of the human right to health.

Even though there have been repeated rhetorical references to the right to health by heads of different states, some countries continue to oppose the waiver of intellectual property rights proposed to the World Trade Organization (WTO) in October 2020 in a proposal co-sponsored by 64 members and reportedly supported by many others. Essentially, these governments are thwarting efforts to make the know-how, technology, and materials needed to make COVID-19 vaccines and therapeutics more widely available.

COUNTRIES IN FAVOUR OF IP WAIVER

Some countries including Pakistan, Argentina, Malaysia, and others support a waiver of Patents and other intellectual property rights as it will help in boosting vaccine & drugs production. The proposal has received support from more than 120 countries including the US, Ukraine, China, New Zealand, and France. The waiver supporters argue that it will increase the manufacture of vaccines and other life-saving medicines. The WTO’s Agreement on Trade-Related Aspects of Intellectual Property Rights (TRIPS) binds members to provide a minimum level of IP protection, including twenty-year patents and copyright, trade secrets, and industrial design safeguards. Those limitations, according to proponents of the waiver, preclude corporations other than the inventors from producing crucial medical items. India and South Africa gave an example of a bottleneck in their initial proposal: early in the epidemic, the United States experienced N95 respirator shortages, prompting the Governor to call on the manufacturer to withdraw its patents. Waiver supporters also note a large amount of government financing given to pharmaceutical corporations to assist the development of COVID-19 vaccinations, arguing that the public is entitled to more access, even if it implies fewer profits. Without a waiver, governments can still force enterprises to create patented products without the approval of the patent owners during public health emergencies, a practice known as compulsory licensing. Those in favor of a waiver, however, argue that the process is too cumbersome and piecemeal. Furthermore, the United States and other wealthy countries have viewed governments that provide forced licenses with suspicion and have frequently put pressure on them.

While some countries are in support of the Patent waiver, it is opposed by big pharmaceutical corporations, as well as the United Kingdom, European Union, Britain, Singapore, Brazil, Australia, and Switzerland. “Moderna”, “Johnson & Johnson”, “AstraZeneca”, and “Pfizer” and “BioNTech” are the primary Western vaccine producers. According to them, the waiver is a ruse that will do little to boost vaccination distribution globally while removing incentives for innovation. Pharmaceutical corporations, health experts, and some governments claim that intellectual property laws, and the income they allow, promote the development of breakthrough technology like COVID-19 vaccines. They also claim that the biggest impediment to global immunization initiatives is a lack of manufacturing capacity, rather than patents. Many countries would be unable to develop the vaccines without the technical competence of the inventors or access to essential ingredients that are already in short supply, critics contend, even if the patents were waived. Meanwhile, some politicians and academics in the United States are wary about allowing China and other competing countries to get critical intellectual property. They claim that vaccine research is uncertain and expensive and that strong IP protection has aided in the development of vaccines at record speed, and will continue to do so in the fight against new variations or a future pandemic.

Big Pharmaceutical companies also claim that vaccine manufacture is tough as evidenced by the production challenges faced by non-specialist AstraZeneca and that just canceling patents will not result in additional injections. The development of complex vaccines necessitates close collaboration between developers and manufacturers. They claim that if they aren’t made properly, public trust in vaccine safety will be harmed. They also refer to over 260 manufacturing and distribution partnership agreements already in place, as well as the fact that, under the existing TRIPS agreement, governments can authorize producers to make patented products without the patent owner’s authorization under the concept of Compulsory Licensing.

Pharmaceutical companies, on the other hand, have offered many alternatives to patent waivers with the goal of expediting vaccine development and production around the world.

For example, AstraZeneca shared their rights so that vaccines can be made at numerous locations to enhance output in June 2020. It reached out to Epidemic Preparedness Innovations (CEPI), Gavi the Vaccine Alliance, and the Serum Institute of India at Pune, India to form partnerships. “Moderna” issued a statement saying that it would not enforce its vaccine patents during the pandemic’s acute phase. In January 2021, the French pharmaceutical company “Sanofi” stated that it had reached an agreement to supply its vaccines to the European Union with “BioNTech,” the biotech firm with which Pfizer collaborated to develop its vaccine. The French firm will assist in the production of 125 million doses of the vaccine. Russia declared in April 2021 that it will provide India with a free technological transfer of its Covid-19 vaccine “Sputnik V.”

Given the tremendous demand, vaccine manufacturing must be significantly increased, followed by a more widespread and equal distribution. Such a task cannot be accomplished just through an IP waiver. While nations with manufacturing capabilities can avail TRIPS flexibilities such as compulsory licenses, this is not the case for countries without such capabilities, particularly LDCs in Africa and Asia. Nonetheless, this IP waiver might be a critical step towards increasing vaccine manufacturing. The argument that suspending IP rights would be a deterrent to the pharmaceutical industry is a bit unconvincing: given the enormous demand, these businesses are guaranteed to make a profit. Furthermore, pharmaceutical corporations frequently benefit from government subsidies and funds, such as in the creation of Covid-19 vaccinations. As a result, it is reasonable to expect the benefits to be shared with the rest of society. Considering the debate between the countries is ongoing, it is too soon to decide whether this initiative is going to be a boon or a bane to society. As the World Health Organization correctly pointed out, people can be safe in this pandemic, only if each and every person’s safety is guaranteed. Until then, the international community must use all available resources to guarantee citizens’ safety, including a temporary IP waiver.

Author: Anuja Saraswat – a student of NMIMS, Kirit P. Mehta School of Law, (Mumbai), an intern at Khurana & Khurana, Advocates and IP Attorney,  in case of any queries please contact/write back to us via email vidushi@khuranaandkhurana.com