Is A Make-Up Look Copyrightable?

A piece of art has worth, a lot of time, effort, and energy go into the creation of any form of art, whether it’s an original painting by Ravi Verma, cartoon characters such as Tom and Jerry, a hand-embroidered saree, a piece of music by Ravi Shankar, a Ram Leela play staged at an auditorium or a black smoky eye. The artist must be given the recognition as it takes their blood, sweat, and tears to create an original expression of thought. Makeup artists treat the face as a canvas for transforming the face with their various innovative make-up techniques. The signature looks turn out perfect after a lot of trial and error in order to fit in with brand owners’ seasonal fashion collections.

Make-up looks are artistic expressions that demand the same level of protection as other works of art. However basic or complex the runway models’ look may be and whatever the monetary value of the artwork may be, it cannot be denied that every artistic and creative characteristic emerges out of an idea that took time and effort to implement. Alike a book by Munshi Premchand, a models’ make-up look for a magazine cover or a fashion show is a creatively fuelled expression. Recreation is not the same as creation. The latter amounts to plagiarism, especially when no credit is given to the original artist as the expression in the work is the result of the application of skill. Hence, it deserves to be recognized and protected from piracy. 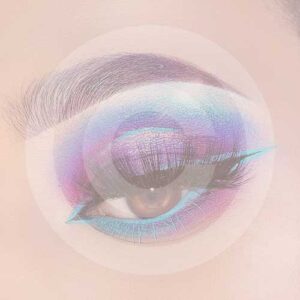 Wherever originality exists, you can be sure plagiarism won’t be far behind and it does not fail to include the beauty industry. Nowadays, it’s often seen that the make-up look done by the artist is stolen where copycat make-up looks are passed off as their own art and aren’t credited to the source. For an instance, Diet Prada called out two editorial beauty looks worn by Rihanna, claiming that the two different makeup artists and creative teams ripped off styles from their colleagues. Rihannas’ silver glitter coated lids, lips, and tongue, according to Diet Prada, were clearly taken from a 2014 design by Yamin for a 2018 Allure story. Snapchat made waves, a few years ago, when it unveiled a new set of face-altering filters that appeared to be directly inspired by the creations of independent make-up artists. These filters weren’t just imitations of beauty looks, in fact, they were identical reproductions of exquisite works of art, seemingly stolen from the feeds of make-up artists.

Many make-up artists complain that it becomes very difficult to protect their creations and pursue legal action for copyright infringement since there is no proper route in the industry for securing their artwork. Copyright is a unique legal right acquired by the owner of a work to prevent the work from being used without his/her consent. The literary, artistic, and musical works are the primary domains covered by copyright protection. Copyright protects a work from the moment it is produced. Generally, to be protected by copyright, one does not need to register the work or apply a copyright notice to it. A person who copies a significant amount of an original work without the copyright owners’ consent is a prima facie infringer, and must thus prove an affirmative defense such as fair use to escape liability.

The Argentine Courts considered this topic in relation to a dispute between a cosmetic artist (plaintiff) and the director of a magazine (defendant). The plaintiff sued the defendant after she was contracted to perform makeup for models in production for the magazine ‘N.’ Following that, she was invited to a parade held by the defendant and saw certain catalogs there, including images indicating that the plaintiffs’ makeup look was created by a third party rather than the plaintiff. The suit was first dismissed on the argument that because the make-up depicted in the images was merely an idea and not work, it did not warrant protection because ideas or concepts don’t have legal protection unless they are applied or accomplished. The Civil Appeals Chamber, later, revoked the plaintiffs’ first-instance judgment, stating that the defendant had harmed the plaintiff by using the photos for a purpose other than the original one for which they were produced (patrimonial right) and by failing to consign the plaintiff’s name as executor of the realized makeup (moral right). Though the Civil Appeals Chamber did not directly apply copyright restrictions in this instance, it tacitly accepted the makeup artists’ moral and patrimonial right to find in favor of the plaintiff.

The Southern District of New York clarified in 2000 that certain detailed tattoos and facial make-up designs qualify for copyright protection. In Carell v. Shubert, the court found that the makeup artists’ facial make-up designs used in the Broadway musical Cats were sufficiently original and expressive, and thus copyrightable, despite the fact that the actors in the play could vary, the makeup remained sufficiently fixed in the same way. Each night’s makeup for the Cats contained a number of elements that “help turn human faces catlike.” Moreover, their application involved “extensive layering” and required up to eight layers of materials and several hours to apply. This was determined to be an original work of authorship fixed in a tangible medium, meeting the requirements for copyright protection under 17 U.S.C. 102.

The wider framework of legislation, however, is required to preserve creativity because not all artistic expressions are regarded equally.

Despite the decision of the court in Carell v. Shubert that facial make-up design is protected under copyright law, the world of make-up art and copyright law is constantly evolving, and some lucidity on how to apportion copyright when a long-term record cannot be made is required. Since intellectual property results from creative effort through the use of human intellect, every conceivable effort must be made to encourage innovative and inventive activity.

Author: Kinjal Baug – a student of  SVKM’s Pravin Gandhi College of Law (Mumbai), currently an intern at Khurana & Khurana, Advocates and IP Attorneys.  In case of any queries please contact/write back to us at vidushi@khuranaandkhurana.com.