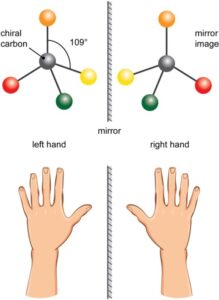 The term ‘chiral’ in chemistry is used to describe molecules that have a central carbon atom to which four different molecules are attached. This central carbon is called a ‘chiral carbon’.When a mixture is such that both the left and right-handed enantiomers are present in equal amounts of a “chiral molecule”, it is called a racemic mixture or a racemate.

In the 1970s, the pharmaceutical industry began focussing on using an isolated enantiomer instead of a racemate with enantiomer pair. Eventually, the value of enantiomeric drugs grew with time. Famous drugs such as Plavix, Nexium, and Lipitor are all single enantiomeric drugs.

It is important to note that the compounds in the aforementioned drugs claim an ‘enantiomer drug’ as a claim. Typically, in an enantiomeric patent, only a single enantiomer of a corresponding basic patent is claimed, where the same chiral drug was formerly claimed as a racemate (with equal amounts of both enantiomers). Therefore, a single enantiomer patent claim is a secondary pharmaceutical patent; and needless to say, such secondary patents are always challenged on the grounds of lack of novelty, anticipation, insufficiency of disclosure, double patenting, etc. With a usual practice of keeping priority dates of the basic patent and the derived enantiomeric patents apart by pharma companies, such claims are scrutinized with the apprehension of evergreening the patent. This is however argued with the fact that expensive research and studies that follow when a drug is made and tested has to be rewarded as any restriction to Intellectual property rights would disincentivize the inventor, as was also said by the UK supreme court in 2018, in a case involving the enantiomer drug Lyrica. Enantiomer patents can also be called ‘selection patents’, where, a single enantiomer is ‘selected’ from a basic patent by fitting into the minimum requirements for a selection patent as given in Novartis vs Union.

Racemate and prior art

In 2015, the Indian Patent Office rejected the patent application of enantiomer for Tofacitinib by Pfizer which described a method for effecting chiral salt resolution from racemic mixtures of enantiomers for use in making certain compounds that are inhibitors of protein kinases.

In the hearings, the Assistant Controller noted that there was no distinctive difference between the claimed compound and a priorly claimed document except that the former was an enantiomer of the latter. The applicants were not able to prove enhanced efficacy further as mandated by the requirements under section 3, Claude (d) of the Indian Patent Act, 1970.

In the case of Hospira, Inc.., v. Sandoz Inc., the court noted that claims were not obvious even though the prior art disclosed the racemic mixture. The reason given was the fact that there was no ‘certainty’ at the time when the racemate was disclosed in the prior art or the chances of success of such a separation were vague. In Otsuka Pharm. Co. Ltd. v. Sandoz, Inc, it was observed that a new chemical compound is obvious if- a chemist, with ordinary skills in the art, would have selected compounds disclosed in the prior art as lead compounds; and there is a presence of motivation for modification of the lead compound into the claimed compound along with a plausible expectation within the prior art that such a modification would likely succeed. However, for enantiomer patents, the cases where prior art discloses the racemate, the application of this lead compound analysis from Otsuka is unclear.

This can be viewed from the lens of the US supreme court decision in the KSR case (127 S.Ct. 1727 (2007) established that the invention is not patentable if it is merely obvious to try. The extent of description of a racemate present in the prior art can be assessed in terms of degrees. If the prior art contains a generally described Racemate, that is not isolated from other compounds in the prior art would indicate non-obviousness. However, a specifically identified racemate as a propitious compound would lead to the conclusion of the claim being obvious.

As per the European Medicines Agency, for the purposes of designation as a ‘New Active Substance’(NAS), an enantiomer is NOT different from the reference active substance, unless it is proven otherwise. It further has given certain points as to what might be considered as a ‘significant difference’ to consider it as a NAS. These include significant changes to dosing frequency and overall efficacy or relevant changes that allow it to be used for a wider set of populations and changes that result in differences to contraindications/adverse reactions.

The question of whether an isolated enantiomer falls within the subject of patentability has been dealt with across jurisdictions. The courts now ascertain the patentability of an enantiomer patent based on several factors. The basic test of obviousness being followed presently is a factual analysis such as whether the Racemic mixture was disclosed or taught within the prior art; whether the prior art exhibits effects depending on stereochemistry; the degree of difficulty in separation of the racemate and secondary considerations for non-obviousness analysis as discussed in KSR vs Teleflix.

Author: Charu Joshi – a student of IIT Kharagpur (RGSOIPL),  currently an intern at Khurana & Khurana, Advocates and IP Attorneys. In case of any queries please contact/write back to us at vidushi@khuranaandkhurana.com.