Ambush marketing is basically a practice in which a rival company or brand attempts to promote its products with another event that already has sponsors. It is simply a situation in which rival associates itself with an event unofficially to breach the full exposure of the sponsors. It’s a form of marketing strategy done by many brands, companies, organizations, etc. Ambush marketing is widely present in every single industry, with the purpose being to raise awareness of a brand in covert ways. It is now pretty much considered as a market method itself. One prominent feature of ambush marketing is that it is really unexpected. A company endorsing and sponsoring something would be more focused on their primary duty, whereas on the other end other companies come out with the most surprising tactic to ambush the event. 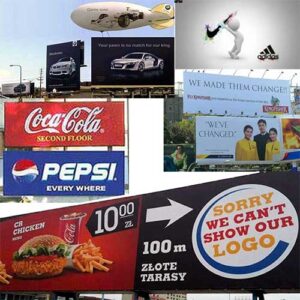 Sports is probably the biggest platform in which ambush marketing prevails. If you consider the amount of sponsorship, endorsements, and so on associated with just one league, or just one team, or even just one player, that’s a lot! Think of, Indian Premier League itself, for example, you have the league sponsors, then each of the franchisees has their own sponsors and even the players have their own apparel and bat sponsors. The number of total sponsors would be loads. Therefore sports seems like a very easy platform via which a rival can use the method of ambush marketing.

The first type of ambush marketing that happens in sports is Direct Ambushing. It is simply the unauthorized usage of symbols, words, logos, designs, and so on. These brands simply go all out on and attack a competitor or just steal their exposure without hiding their intentions. Further, there are four types of Direct Ambushing: Predatory Ambushing, Coattail Ambushing, Trademark Infringement, and Self-ambushing. Predatory Ambushing is a marketing tactic in which a brand attacks the sponsorship of a rival band and eventually confuses the consumers as to who the official sponsor actually is. Coattail Ambushing refers to an activity where a brand takes advantage of a platform set up by another brand in order to gain some visibility for themselves. Trademark Infringement is a situation where a brand intentionally uses trademarks, taglines, and so on from another brand to advertise itself with the intention being to confuse the customers and spoil the marketing efforts of the other brand. Lastly, self ambushing is a marketing stunt by brands in which, brands which are already a sponsor of an event, surpass the parameters of their contract by performing various event activities.

Few instances in which Direct ambushing has openly happened in the past are, During the 2012 London Olympics, Beats Electronics was not a sponsor of the Olympics. Taking advantage of the audience of Olympic games without paying anything, the CEO of Beats gifted athletes customized headphones with the colors of their irrespective home flag. This was observed by many people and even lots of athletes tweeted about this and Beats got millions to see their product without even paying a dime. Another instance is during the 2008 UEFA European Championship. Carlsberg, a beer brand was an official sponsor of the tournament. They gave out free branded t-shirts and headbands of Carlsberg in spite of such a thing not being a part of their contract agreement, by doing this they infringed the rights of other sponsors who agreed on giving out free products. Looking at how to direct Ambushing itself works, I can figure out how sports is the biggest and even the best platform for any brand to ambush. The fact that sports rely on sponsors and spectators, is the very reason why it can be used as the best platform for brands to Sponsor and even not sponsor and still gain exposure and popularity.

Indirect ambush marketing by association is a strategy used by brands to create an illusion that the brand is associated with the event by using terms, pictures and so on that are not protected by intellectual property laws. So in this form, a brand will use indirect statements as promotion with reference to the event and gain popularity. On the other hand, indirect ambush marketing by distraction is simply a situation in which a brand sets up a promotional presence in and around or even in the area of an event without any attempt to have an association with the other brand and the event. This happens when brands basically distract people by some activity of theirs that is not even related to the event, but their motive is to attract the attention of those involved with the ongoing event.

Examples of indirect Ambush Marketing in sports are: During the 2012 London Olympic games, an Irish Gambling chain named Paddy Power put up billboards across London claiming themselves to be the “ official sponsor of the largest athletics event in London “ for that year. In a smaller print, they put a disclaimer as well which makes it clear that they were referring to the French Town of London and not referring to the Olympics. They were referring to a traditional egg and spoon race in London, which they were actually sponsoring. The International Olympic Committee (IOC) even tried to sue Paddy Power for their cheeky ambush, but they failed. Another example of Indirect Ambushing is a marketing distraction set up by Nike during the 1996 Olympics in Atlanta. Reebok was the official sponsor of that year’s Olympic games. What Nike did is that they set up an alternative athletes village which overlooked the Olympic park a distance of about one mile away from the Official Olympic athlete’s village. They gained so much attraction not only from the random people but from the athletes as well.

Indirect Ambush marketing is easily one of the most commonly used methods of ambush marketing. It happens in so many ways in all the possible sports tournaments. This form of ambush marketing does not intend to associate with the event or the sponsor of the event. Its motive is just to drive away the attention of the spectators away from that event by some action.

The next type of ambush marketing in sports is Ambush marketing through the athletes. What brands attempt to do here is to get an individual athlete ambush an event like the Olympics or get an individual player of a team to ambush the team’s official sponsor. This could be related to the previous example of how Beats used the athletes of the Olympics to ambush the event. During the 1992 Barcelona Olympic games, Nike used their face, and one of the most popular persons on the planet during that time, Michael Jordan by having him cover a rival company and officially sponsor Reebok’s logo with the American flag. So Jordan not only took the stage to get an Olympic Gold for him but for Nike as well. The bold move by Jordan to involve himself with marketing in such a way would have definitely gotten him a huge payoff.  So basically, brands like Nike, Reebok, Adidas, and so on, have collaborated with sportspersons and have created signature shoes for the sportspersons. With this collaboration, the brands make those signature shoes into a signature brand itself which starts to sell all types of merchandise made by that brand itself. So basically if an athlete has collaborated with say for example with Nike, he is now a part of Nike! And when he’s attending an event sponsored by a rival like Adidas, he is ambushing the event by wearing his signature Nike products. Or he could also be a player with a club that is sponsored by Puma. His jersey will be a puma, but his shoes are his signature Nike shoes, therefore he is promoting Nike in front of a platform in which Puma has spent money to promote itself.

For instance, in the Bavaria incident, Bavaria was charged in court and fined for the brew angels stunt since it conflicted with FIFA limitations which clarified that marks that had not purchased sponsorship rights to the World Cup were denied from doing marketing exercises at the event. Still, even with such limitations, ambush advertisers can at present discover approaches to skirt around the restrictions. For model, notwithstanding severe limitations being set up and even brand police being sent at the London Summer Olympic Games in 2012, Beats by Dre was as yet ready to effectively execute an ambush marketing effort at the games without making itself at risk of a lawsuit.

All taking all things together, It can be derived that ambush marketing will stay a lawful hazy area since it is difficult to cover all possible ambush marketing situations, and ambush advertisers will keep abusing these lawful holes to dispatch ambush marketing efforts. While it is a disputable practice, ambush marketing will keep being an extraordinary path for brands to raise their image value, upgrade purchaser observations and maybe increase a portion of the market. Brands that choose to go this course should be speedy and profoundly innovative in the event that they need their trap promoting efforts to be compelling and memorable. If you choose to go down this course, it is likewise acceptable to initially make yourself mindful of the limitations encompassing an occasion or another brand’s showcasing effort before propelling your ambush promoting effort, at any rate on the off chance that you would prefer not to discover your image on edge end of a legitimate suit.

Author: Ryan James – a student of  School of Law (Christ University), intern at Khurana & Khurana, Advocates and IP Attorneys.  In case of any queries please contact/write back to us at sudhanshu@khuranaandkhurana.com.