The Supreme Court of India recently pronounced the milestone judgment of P. Mohanraj V. Shah Brothers Ispat Pvt. Ltd. One specific question raised in the said judgment related to whether the scope of Section 14 of the Insolvency and Bankruptcy Code, 2016 (“IB Code”) would cover the magnitude of the Negotiable Instruments Act of 1881 (“NI Act”).

In addition, the question raised is it is permitted to initiate the cheque bounce proceeding under the NI Act or to continue the proceeding against the debtor company and its directors when the debtor company is about to resolve its bankruptcy issue or in an ongoing corporate insolvency resolution process (CIRP). 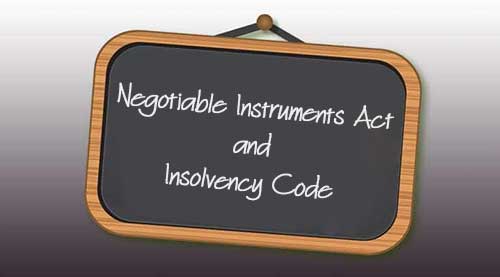 The appellant herein the Shah Brothers Ispat Pvt. Ltd filed a Complaint to the National Company Tribunal of Chennai (“NCLT”) against M / s Diamond Engineering Chennai Pvt. Ltd herein the “Corporate debtors” for the debts of Rs.24, 80, 33, 430/-. In view of the failure of P. Mohanraj the “defendant” to repay the debt, the NCLT made a decision on June 6, 2017, approving the company’s motion and appointing an interim Resolution Professional.

Consequently, the Respondents submitted MA/102/IB/2018 and CP/507/IB/2017 the NCLT made a decision on May 24, 2018, considering the circumstances, ordered that the Appellant having the knowledge of the moratorium order dated June 6, 2017, has filed the proceeding against the Corporate Debtor. The Tribunal instructed to take down the said complaints because this approach constitutes a violation of the principle of moratorium invested under IB Code.

Furthermore, the Appellant approached the National Company Law Appellate Tribunal (“NCLAT”) which declared that the procedural aspect of the NI Act is considered a criminal proceeding provided that the magnitude of the moratorium will not constitute and cover the ambit of the NI Act. The Appellate body allowed the contentions of the appellant as in the proceeding are of dualistic distinct nature and allowed the corresponding prolongation of proceeding by keeping aside the order passed by the NCLT.

After which the appeal reached the Supreme Court of India and an important legal question was raised, namely whether the institution or continuation of proceeding under Section 138 and 141 of the NI Act can be covered under section 14 of the IB Code.

The Supreme Court of India in the aforesaid case held that the principle of the moratorium invested under section 14 of IB Code covers the proceedings under the magnitude of the NI Act.

The Court while deciphering the underlying context of section 14 (1) (a) ascertained that the expression “or” appears twice in the first part of Section 14 (1) (a). The phrase “institution of suits or continuation of pending suits” should be understood as a category and “proceedings against the corporate debtor” would be a separate category. It is important to note that these categories are unglued by a disjunctive “or”. Also, the second category is roughly worded and includes “any judgment, decree or order” and “any court, tribunal, arbitral tribunal or other authority”. Therefore, this will subsume criminal proceedings under the NI Act, since criminal proceedings under the 1973 Code of Criminal Procedure (“C.r. PC”) are conducted in the courts referred to in Section 6 of the C.r. PC. Moreover, The Court also rejected the applicability of Ejusdem Generis and noscitur a sociis as they cannot limit the scope of a broad provision that can otherwise be reasonably understood from the terminology used in the provision.

In addition, the Court coupled with the objective of the moratorium under section 14 of the IB Code. By pointing the rationale behind moratorium, which keeps the assets of the corporate debtor’s secure with no reduction in numbers during the bankruptcy settlement process CIRP. In the light of ‘Quasi-Criminal’ Proceedings under the NI Act, the court observed that the liability here is of civil nature but considered a criminal offense, as such liability is penalized by law. In a catena of cases like the Kaushalya Devi Massand v. Roopkishore Khore and Meters and Instruments (P) Ltd. v. Kanchan Mehta, the Supreme Court stated that the nature of the offense is of civil nature. Hence, the motive behind this law is to compensate the victim not to punish the offender.

In the spectrum of the above discussion, the judgment clarified that the proceeding invested under the NI Act is not merely criminal but of civil nature. The Court with rational nexus allowed the proceedings under Section 138 in conjunction with Section 141 to continue against the Directors by which the promoters left high and dry. As a result, financial institutions holding corporate accounts of the corporate debtor receivable will only act on the direction of the Resolution Professional. It is important to note with this judgment, the verdicts passed by the Bombay and Calcutta High Courts in Tayal Cotton Pvt. Ltd. Maharashtra and MBL Infrastructure Ltd. Manik Chand Somani have reduced the scope of a moratorium to explicitly exclude criminal proceedings have been overruled. And the paramount settled by this judgment has amplified the ambit of section 14 of the IB Code by allowing the scope moratorium to cover the proceedings invested under the NI Act.

Author: Akshat Dahate – a student of ILS Law College (Pune) intern at Khurana & Khurana, Advocates and IP Attorneys.  In case of any queries please contact/write back to us at anubhav@khuranaandkhurana.com.