The Utility of Artist’s Resale Right

Droit de suite or Artist’s Resale Right (ARR), a concept that traces its origin to France in the 1860s, exists as an economic justification for all that the artists lose during their creative lifetime. ARR is considered a moral right of the artist. The share in the resale indicates that when later the value of the work increases, it is assumed that the increased value was already inherent in the piece from the very start. 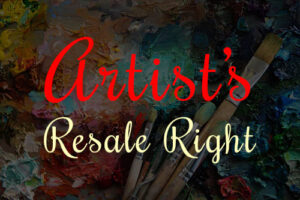 The definition of art as a cultural good, reflecting back upon the culture of the society, still remains vague, however, attempts have been made. Klamer (2004a) and Throsby (2001) give it three characteristics in a functional definition: creative production, with a symbolic meaning, and the output is intellectual property. Art as a commodity, however, does not behave like a normal good in the market, as most economists would agree. The basic belief that seems to have been concluded upon is that certain assumptions exist about the relationship between the artist and the society that cause the delayed realization of the work’s value. More specifically, it is the “mental poverty” of the society resulting in the economic poverty of the artist.

The image is of an artist who is starving, struggling, and creating out of poverty (considering that conflict has been a recurring background element of the greatest of artists), and selling it for a meager price, and finally maybe a few years later or a fifty years later, his work becomes worth thousands of dollars. However, the action is not involuntary since the artist has his own fixation and affinity for things that call for such controversy or instability. That is exactly what separates him from his bourgeois audience. The aim, therefore, is to compensate, if not him, then his successors, so that even though the controversy surrounding the artist leads him to poverty, it does not become a cause for the eternal poverty of his successors, especially in cases where the success of the work increases exponentially post-death of the artist.

Having originated in France, internationally, the Berne Convention for the Protection of Literary and Artistic Works in 1948 first included ARR. The Berne Convention of 1971 mentions the “inalienable right to an interest” of the authors and the artists in a resale of their work. However, it is optional legislation and works on the principle of reciprocity between nations. The need for legislation like this was felt in alignment with the consumer protection laws as well as the weaker bargaining position of the artist in relation to the art collector.

In India, artists and their successors have had the right to a portion of resale of their work ever since 1994 but the status of this right has remained fairly underused. A prominent name who failed to exercise this right is Tyab Mehta, who had been a part of the Progressive Artists’ Group. The Group had been at the forefront of the Indian Modernism movement, but unlike MF Hussain and FN Souza, Tyab Mehta and his works had been quiet and his work only started earning as high as Rs 24 crores very late in the artist’s life. In 2018, his work Kali has earned over Rs 26 crore. His collectors, especially Chemould, had received those sums of money while Mehta did not. ARR fails not only by non-exercise but also when after purchase, private owners and galleries, usually keep the art in possession for a long time.

ARR tries to provide the said economic security only through means of resale. Therefore, he can only benefit from it if the art goes through a change of ownership during the lifetime of the artist or during the copyright limitation period. The likelihood of the happening of both of these is not certain. Further, S.53A of the Copyrights Act of India ambiguously mentions ARR. It only fixes the cap at 10% with respect to the artist’s share in resale. There is no clear outline on resale royalty rights. However, the IP Appellate Board may set the rate of the royalties. Copyrights exist for 60 years since the date of the artist’s demise and any suit against its violation can only be lodged within 3 years from the date of such act. But, S.63 of the Act, which lays down the penalties for infringements, makes S.53A an exception, thereby exempting galleries and auctioneers, who can then withhold payment till the Appellate Board gives a ruling.

Although it is treated as a kind of penance, ARR has its own pitfalls. In cases where artists are recognized while they are alive, ARR is not required, and in cases where their work find recognition after a long period of time, fifty-sixty years, then ARR does not have the effect that the right desires to achieve since the artist is long gone and his heirs are not solely affected by his financial state when he was alive. It also seems that this right is limited to a specific type of art market, viz., that of painters and sculptors. Therefore, its extent is only limited to those pieces of art that can be resold. Massive sculptures, monuments, extremely fragile objects, and the like, are not capable of allowing resales over and over again, resulting in such artists falling out of the purview of the right. Also, this right is generally limited to “original” or “unique” pieces of art. Where multiple artists produce reproductions of an “original” piece, the artist is deprived of a share in that reproduction.

WHETHER ARR IS JUSTIFIED

The assumptions that form the basis of ARR is constituted of thirteenth-century romantic ideas of an artist and his dynamic with the society; the emotional appeal of the argument for ARR is somewhat lost today with the change brought on by the advent of the internet that has increased the platforms that the artists can play on. ARR also fails when the copyright passes on to the buyer and is not retained unless expressly provided. However, buyers like galleries and exhibitionists would rarely agree to purchase a piece of work without purchasing its copyrights as well. Also, once an idea is brought to a material manifestation, anyone who appropriates it can reduce or increase its marginal cost. This is beyond an artist’s control.

It can be argued that the artist is not blind to the patterns that artworks follow and yet he chooses to engage in the trade. Why then the ARR should exist as a moral right of the artist? There exists a distribution difference of sales for the artists. Few earn magnanimously, while the earning of the rest are close to minimal. For example, in the UK in 2008 recorded that out of the artists that benefited from ARR right, 60% earned 24£ or less per artwork, while only 2% earned 50,000£ or more per artwork. It has been seen that even though the distribution of income is heavily biased towards low-income earners, with only a few having a high income earning capacity, it has not deterred the artists from introducing their work in the market and taking the risk. This behavior has been compared to that of lottery players where they make an overestimation of their chances at winning (what Menger terms as “rational fools”). Economist G Wang points out that an increase in the earnings of the artists reduces the consumer surplus (the part of income left with the consumers after fulfilling their needs), indicating a lower level of savings and hence lower investment- a sign of lower economic welfare of the society as a whole.

The strongest argument that exists is the investor’s argument. The high price is the reward for the risk he takes at the time of buying the art from the artist, a benefit received by fair play. The investor will not get compensated for his money if later the art piece does not hold even a nominal value in the market. Difficulties exist in exercising copyrights, or in the prevention of its violation, once a piece of painting or sculpture has been exposed to the public eye. It is specifically the visual arts that suffer the worst blow.

Controlling and monitoring the resale is an even greater problem. But where possible and visible, the right of obtaining resale royalties can be advantageous, though it can only rarely constitute an artist’s major source of economic welfare. However, for his welfare, an artist can explore more viable options than ARR, like controlling the manner and type of exhibition of his work, payment clauses in his contract that penalize late payments, non-manipulation of his work after-sale, etc.

Author: Divya Tirkey, a student of Rajiv Gandhi National University of Law, Patiala, currently an intern at Khurana & Khurana, Advocates and IP Attorneys. In case of any queries please contact/write back to us at vidushi@khuranaandkhurana.com .