The Central Government promulgated the Tribunals Reforms (Rationalisation and Conditions of Service) Ordinance, 2021. The Tribunal Reforms (Rationalisation and Conditions of Service) Bill, 2021 was introduced in the Parliament earlier this year but could not be taken up for consideration and passing. Exercising the power under Article 123(1) of the Constitution of India, the President promulgates this Ordinance. 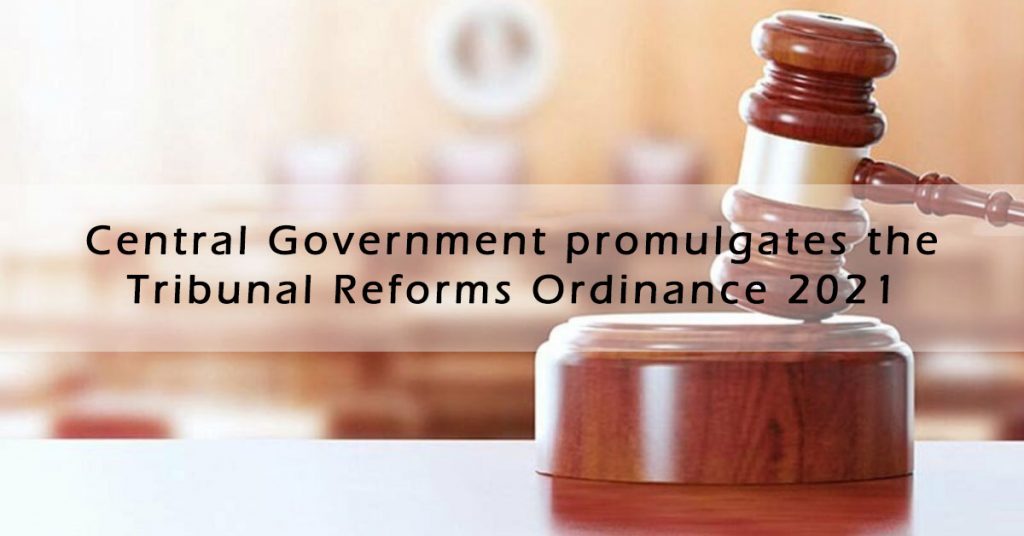 Through this Ordinance, the Central Government brings some of the substantial changes in the existing framework of appellate bodies and transfer their functioning to other judicial authorities.

In the Cinematographic Act 1952, the ordinance transfers the appellate function of the Tribunals to the High Court amending Section 5C of the Act. Omitting the word “Tribunal” under sections 7A and 7C, it has been substituted with “High Court”. Section 2(h) which defines the Tribunal has been omitted. Moreover, clauses (h), (i), (j), and (k) of sub-section 2 of section 8 which defines the power to make rules have also been omitted.

The Ordinance brings similar changes to the Protection of Plant Varieties and Farmers’ Right Act, 2001. Section 2(d), (n), (o), (y), (z), where the reference to the members and chairperson of the Tribunal has been mentioned, has been omitted. At places such as section 56, 44, 57, the word “Tribunal” has been replaced with the word “High Court”. Few sections such as 54, 55, 58, 59, where the reference to the Tribunals, its composition, and the procedure is mentioned, have been omitted.

This Ordinance also brings some of the changes in the Finance Act 2017. Providing substantial changes to section 184 which gives the power to the Central Government to make rules to provide for the qualifications, appointment, salaries and allowances, resignation, removal, and the other conditions of service of the Chairperson and Members of the Tribunal as specified in the Eighth Schedule. It added that an appointment will be made on the recommendation of Search-cum-Selection Committee which will consist of the Chief Justice of India or a Judge appointed by CJI, along with two secretaries appointed by the Government and one secretary of that department under which the Tribunal is set up. The Committee will also have one member who will be a retired Judge of the Supreme Court or the Chief Justice of the High Court, in case the Tribunal is Industrial Tribunal under Industrial Dispute Act 1947, Tribunals and Appellate Tribunals constituted under the Recovery of Debts Due to Banks and Financial Institutions Act, 1993. The Chairperson of the Tribunal shall hold the office for 4 years or till he attains 70 years of age and other members will hold for 4 years or till he attains 67 years of age. Those Tribunals whose power has been transferred were omitted from the purview of the Finance Act 2017.

Author: Saransh Chaturvedi (an advocate) currently pursuing LLM from Rajiv Gandhi School of Intellectual Property Law (IIT Kharagpur).  In case of any queries please contact/write back to us at aishani@khuranaandkhurana.com, Khurana And Khurana – Advocates and IP Attorney