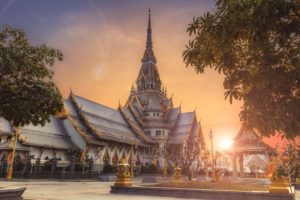 In a suit for trademark infringement filed by the religious organisation, ISCKON (International Society for Krishna Consciousness), The Bombay High Court declared that “ISCKON” is a well-known trademark under the definition given in Section 2(1)(zg) of the Trade Marks Act, 1999. The suit was filed against Isckon Apparel Pvt Ltd for using the mark “ISKCON” in respect of various goods and services. On March 6, the Court had already granted an ad-interim injunction against the defendant company. The permanent injunction was granted on Friday.

Representing the plaintiff, Advocate Hiren Kamod submitted that the acts of infringement by the defendant company came to the knowledge of the plaintiff during February. It was further submitted by Kamod that repeated summons was served by the plaintiff to the company which went unanswered. Thus, the plaintiff approached the High Court to seek a permanent injunction against the defendant from using the said mark.

Director of the defendant company, Roshan Baid submitted to the Court that the company had changed its name from “Iskcon Apparel Pvt. Ltd.” to “Alcis Sports Pvt. Ltd.” and thus, “Isckon Apparel’ did not even exist as of then. He further submitted that he had already given an undertaking stating that the defendant company will refrain from using the said trademark in any manner whatsoever.

Referring to the religious organisation, Kamod stated that ISKCON was established in 1966 in New York and ever since had gained international recognition and repute which was not restricted to any particular goods, services, or activities. On the contrary, Kamod added, the organisation’s trademark enjoyed a diverse personality that was even beyond the scope of products and services rendered under the mark. Kamod further argued that in view of the averments made and the evidence submitted, in addition to the reliefs sought in the prayer, the plaintiff was also entitled to the declaration of “ISKCON” being a well-known trademark.

The single-judge bench constituted by Justice B.P. Colabawalla noted that the claim of well-known trademark by the plaintiff was not disputed by the plaintiff. He further stated that “ISKCON’ was a coined term which meant that it did not exist before its use by the plaintiff. The Court held that on account of the documents and evidence proving the “immense and long-standing reputation and goodwill throughout India and abroad”, the trademark “ISKCON’ shall be associated exclusively with the plaintiff.  Agreeing with the plaintiff’s contention concerning well-known trademark, the Court stated, “I have no doubt in my mind that the Plaintiff’s trademark ISKCON has come to enjoy a personality that is beyond the mere products/services rendered thereunder and the recognition, reputation and goodwill of the said trademark ISKCON is today no longer restricted to any particular class of goods or services.” The court further added, “From the material placed on record, it is evident that (a) the Plaintiff’s trademark ISKCON has wide acceptability; (b) the popularity of the Plaintiff’ s trademark ISKCON extends not only in India but in other countries as well; (c) the Plaintiff is using its trade mark ISKCON openly, widely and continuously since the beginning; and (d) the Plaintiff has taken several actions against various infringers in the past”.

The Court was of the opinion that the said trademark, “ISKCON” satisfied the test and requirements of a well-known trademark as provided in sections 11(6) and 11(7) of the Trademarks Act. The suit was decreed in terms of the prayer sought by the plaintiff.

Author: Aparthiba Debray an intern at Khurana & Khurana, Advocates and IP Attorneys.  In case of any queries please contact/write back to us at aishani@khuranaandkhurana.com.