Advent of Reliance Jio has completely transformed the dynamics of telecom sector in India. Almost free outgoing calls and extremely cheap data services has forced revolutionary changes in the pricing of telecom services as well as the structure of the telecom operators. Vodafone Idea merger and Airtel-Tata DOCOMO merger are remarkable examples of this shift. For consumers, there has been a huge relief in terms of the cost of availing telecom services. In order to compete with Reliance Jio’s extraordinarily cost-efficient plans, other telecom operators had to cut their tariff plans too. However, reductions in the prices have seemed to affect average revenue per user (ARPU) of these telecom operators.

To combat this, telecom operators have repeatedly tried strategies which often run contrary to the interests of the consumers at large. Latest in the list is ‘minimum recharge tariff’ plan.Through this plan, the telecom companies have introduced a host of sub-Rs 100 prepaid packs such as Rs 35, Rs 65 and Rs 95, with a 28-day validity period. This means that users who do not recharge their plans would see outgoing calls blocked in 30 days and incoming ones in 45 days.

There are a major chunk of dual-SIM smartphones consumers who use a secondary connection (usually a service other than Reliance Jio) exclusively for incoming calls. The latest plans will force such consumers to recharge their secondary SIM a minimum amount every month only for receiving incoming calls. Then there are 2G users, who for several reasons cannot afford to have a 4G smartphone. A large number of such users have a mobile connection only for receiving incoming calls. These telecom operators, through this scheme, aim to remove such users and shift them to a monthly plan with minimum recharge which would, in turn, boost ARPU of these telecom operators.

The scheme is a complete departure from ‘lifetime free validity’ model that had been in place all these years. Lifetime free validity scheme had several positive impact on the growth of telecom sector as it led to steep rise in the number of subscribers and brought telecom services to the low-income section of the population particularly residing in semi-urban and rural areas. The scheme was advantageous for the consumers unable to afford monthly rental services. The new tariff scheme would roll back the benefits and low-income subscribers will be the most affected by it.

Telecom Regulatory Authority of India (hereinafter ‘TRAI’) was created by TRAI Act 1997 to regulate telecom services especially the services provided by private operators. One of its central objectives is to ensure consumer protection. In doing so, TRAI has taken several measures in the past to facilitate quality services at affordable rates.

In the present case as well, TRAI has been receiving a large number of complaints from customers.[1]However, it has been stated by TRAI that it will not interfere in the actual tariff structures, as telecom operators are responsible for the same.[2] Further, the tariff plans do not violate TRAI Regulations on tariff which prescribes for a minimum of six-months as tariff protection period.[3]

No Prior Approval Needed

Initially, TRAI had directed standard tariff packages for cellular mobile services. The service providers were also required to seek prior approval of the authority before launching new tariff plans and/or making changes in the existing plans. However, due to high degree of competition in the telecom sector and decline in the tariff, the authority shifted to de-regulation of the tariffs.

Hence, in the current setup, service providers enjoy full flexibility to provide tariff plans according to their policies and the requirement of seeking prior approval has been waived off. Huge concerns were raised when telecom operators had doubled the data charges a few years ago but no actions were taken as regulation of service charge is predominately the responsibility of the service provider and TRAI’s mandate does not cover it.

The aim of providing telecom operators the liberty to fix tariff plans on will was done with a view that increased competition between the market players would lead to reduction of rates of telecom services to the consumers. With the new tariff plans in place, shifting back to regulation of tariffs is a notion that TRAI should worth considering. After all, protection of the interest of the consumer is the central mandate of TRAI.

Further, TRAI enjoy the power to “issue such directions to service providers as it may consider necessary for proper functioning by service providers”.[4] In the present case, TRAI should ideally step in and use this power to bar the telecom operators from continuing their plan or ask the operators to bring necessary changes to the current plan.

According to Telecom Consumers Complaint Redressal Mechanism Regulations 2012,[5] an aggrieved consumer is ought to get his complaint resolved through this procedure:

The above mentioned steps must be followed else your complaint in the consumer court will not be entertained.

In the recent Supreme Court judgment in Competition Commission of India v Bharti Airtel Ltd.,[7] the position of TRAI and CCI with respect to antitrust claims that require interpretation of TRAI Act 1997 has been cleared. The Apex Court has ruled that CCI cannot proceed with investigations of alleged antitrust breaches by telecom operators if the case involves interpretation of TRAI Act. Since, TRAI is better placed to interpret TRAI Act, investigations by CCI in such cases could only proceed after jurisdictional facts are determined by TRAI.

Notably, the above mentioned case concerned the alleged cartelisation of Bharti Airtel, Vodafone Idea and Cellular Operators Association of India (COAI) when these operators had refused the consumers to avail mobile portability service.

The definition of cartel has been provided under Section 2(c) of the Act which reads as follows: ‘cartel includes an association of producers, sellers, distributors, traders or service providers who , by agreement themselves, limit, control or attempt to control the production, distribution, sale or price of or, trade in goods or provision of services.’ 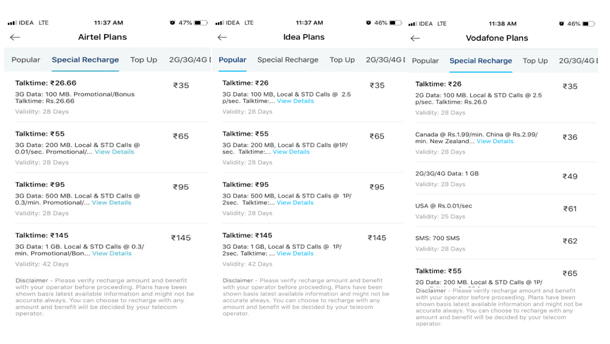 In the present case, as seen above, the tariff plans launched by both Vodafone, Idea and Bharti Airtel are almost identical in nature. This would not leave much option for the customers except for subscribing to the plans. Further, all the telecom operators rolled out the tariff plans at around the same time. Hence, this is a clear case of cartelisation in reference to the minimum recharge tariff plans as the service providers are clearly attempting to control the price of the tariff plans.

As laid down in the Competition Commission of India v Bharti Airtel Ltd judgment, TRAI is likely to have significant role to play if such claims are launched.

Vodafone + Idea  and Bharti Airtel( after merger with Tata DOCOMO) currently stand as the top operators telecom market in India both on the basis of revenue and consumer base.[8] Further, if we consider the relevant market of ‘2G and 3G cell phone services’, Vodafone Idea (or Bharti Airtel) could easily qualify as holding a ‘dominant position’ in geographical market of India within the meaning of Competition Act 2002.[9]

According to Section 4(2)(a)(ii), imposing ‘unfair’ price in purchase or sale of goods or service would amount to an ‘abuse of dominant position’. In the present case, these telecom operators are abusing their dominant position in the 2G and 3G cell phone market by forcing the customers to subscribe to the unfair tariff plans.

It is certain that low-income consumers will be affected the most by these new tariff plans. The plans could have long lasting adverse impact on the prosperity of the telecom sector in India. TRAI’s mission is “to create and nurture conditions for growth of telecommunications in the country in a manner and at a pace which will enable India to play a leading role in emerging global information society”. In the past one decade, TRAI has been quite successful in doing justice to its mission.

While the Smartphone boom in India has been remarkable, still more than 75% of the cell phone users rely on feature phones that work on a 2G or 3G platform.[10] This plan will hit them the most and it is highly likely that portion of those users would be wiped out from the network due to unaffordability of the new tariff plans. This is in the long run is definitely going to affect India at large as on one hand Centre is hoisting the Digital India and E-Governance on the other hand these telecom providers are excluding a major population from this bracket of basic amenity of communication. Such acts of the Telecom Operators like Bharti Airtel, Idea and Vodafone  is highly reproachable.

Stance of TRAI in this matter has been soft so far but the situation demands the regulatory body to take necessary strong steps against the operators. As discussed above, the antitrust claims could be relevant, more so in light of ongoing cases against the telecom operators.

Author: Mr. Shubham Borkar, Senior Associate – Litigation and Business Development  and Parimal Kashyap – Intern, at Khurana & Khurana, Advocates and IP Attorneys. In case of any queries please contact/write back to us at shubham@khuranaandkhurana.com or at www.linkedin.com/in/shubhamborkar.