As a result to the PIL filed by Prof. Shamnad Basheer, complaining against IPO for noncompliance of section 146 (working statement of Patent invention), in the year 2015,  the Delhi High Court, recently in January 2018, passed an order directing the Government to submit an affidavit outlining a plan for putting in place a standard operating procedure/enforcement mechanism with respect to Form 27 as well as taking an action against errant patentees. With respect to this, the Patent Office invited the stakeholders to come up with  their suggestions for making Section 146 and Form 27 effective.

The IP India portal has provided with suggestions provided by various organizations (here and here), few of which has been majorly discussed by most of the stakeholders as provided below:-

It is incredible to note that the stakeholders were also as much a part of this process as the Government. As much as 64 stakeholders came forward with various issues with regard to Form 27 and its solutions. Stakeholders included major key players in the market such as Bosche, Japanese IP Group, FICCI, Huawei Technologies Co Ltd, China, CIPI, London and many more. There were other responsible academicians from various Law universities and the rest were Intellectual Property Firms such as Lexorbis, Anand and Anand, S.S Rana and others.

The above mentioned are the few suggestions to the issues that have been recommended by majority of Organizations. It can be observed that Form 27 needs to be a little flexible with the changing dynamics of Industries of the Contemporary practices. Also, the Act needs to be more clear about its provisions and explanations with respect to ‘Working Patent’ , ‘disclosure of information’ and frequency of submission of Form 27. This would not only make the procedure smoother for the Patentee, but would also help the Patent Offices to function swiftly. The proposed revised form may be something like as provided below. 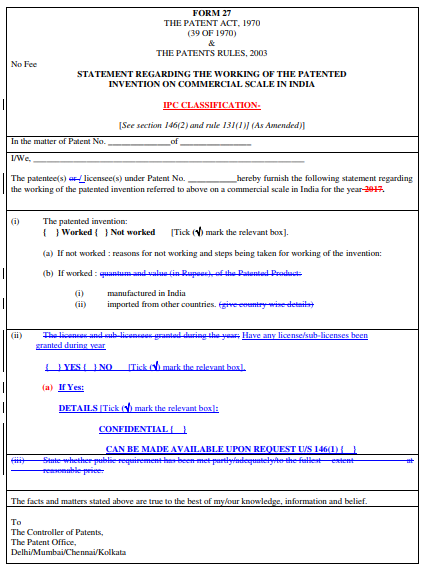 Author: Pratistha Sinha, Associate, Yogita Shinde, Intern  and Mudiganti Sai Krupa, Intern at  Khurana & Khurana, Advocates and IP Attorneys. In case of any queries please contact/write back to us at swapnils@khuranaandkhurana.com.