Patents have been granted in various biotechnology fields such as genetically engineered plants, human genetic sequencing, recombinant DNA molecule, diagnostic kits, stem cells, isolated nucleic acid encoding a gene and DNA related inventions such as preparing vectors, primers etc, but it was not the same before genetically engineered microorganism was granted a patent first.

The patenting of genes and/ or DNA sequences has always been popular in the US, European Union (EU) and Japan. However, patenting of DNA sequences/ genes per se was not allowed in India until January 2005, but processes involving recombinant DNA technology to produce proteins involving a gene or DNA sequence was a patentable subject matter. Following the third amendment of the TRIPS agreement, product patents for DNA, RNA or genetic inventions are also included as a patentable subject matter.

This blog would be addressing patentability aspects of DNA based primers, Genes and Gene Sequencing and comparison of granted patents of same patent family in three main jurisdictions i.e. USA, Europe and India.

Facts of the case:

Myriad, is the assignee of US5753441 which covered specific mutations of the BRCA1 gene, US5747282 talked about method of diagnosis, US5837492 covered BRCA2 gene and not only sequence of the gene but also use of it for diagnosis, risk prediction, screening/ therapy and US5709999 covered the gene itself, protein and possible diagnostic kits.

Myriad alleged patent infringement against Ambry for many claims. Six claims were at issue in the appeal, and requesting a preliminary injunction against Ambry. Four of six claims on appeal were directed to DNA primers, which are “short, synthetic, single-stranded DNA molecules that bind specifically to intended target nucleotide sequences” (primer claims). Further, remaining two claims were method claims reciting comparisons of the wild-type BRCA sequences with the patient’s BRCA sequences.

Further, with respect to the DNA primer claims, Myriad argued on appeal that synthetic DNA primers are not naturally occurring because single-stranded DNA cannot be found in the human body.  Moreover, Myriad argued that DNA primers have a fundamentally different function than when they are part of the DNA strand.  Relying on the Supreme Court’s Myriad decision, the Federal Circuit rejected Myriad’s arguments and concluded that the fact that primers are synthetic and it makes no difference since synthetic primers “are structurally identical to the naturally occurring compositions” and function just like naturally occurring DNA by binding to complementary nucleotide sequences and separating DNA “from its surrounding genetic material is not an act of invention.”

While many have hailed this decision as a victory for public health and individual rights, others feel this decision effectively sounded the death knell for patents on genetic based testing and diagnostics.

International Survey of the Patentability of Genes, Proteins and Other Genetic Materials (SOURCE: BricWall)

Considering all the amendments to the concerned/relevant sections of the Indian patent act, below is discussed the latest scenario regarding Gene Isolation and Diagnostic Methods in India.

In sub-section 3(c), “the mere discovery of a scientific principle or the formulation of an abstract theory or discovery of any living thing or non-living substance occurring in nature ” is not an invention. Thus, merely isolated naturally occurring genes are considered a discovery and not an invention and are therefore deemed to be not patentable as per sub-section 3(c). Gene isolation is required to be patentable. Genes as they are found in situ are not patentable. For instance, a patent can be granted for the isolated DNA sequence corresponding to the coding region of a human gene only if the sequence is new and was isolated by a method that would be considered non-obvious by a skilled person, and if it presents unexpected, surprising properties. For this reason then, the sequence function must be disclosed in the patent application and filed to meet the industrial applicability requirements.

The Indian Patent Office’s Manual of Patent Practice and Procedure (March 22th 2011) states, under the guidelines for the unity of invention, states that independent claims of different categories may relate to a single inventive concept in case of In case of a genetically modified Gene Sequence/ Amino Acid Sequence claims may be directed to a Gene sequence / Amino Acid sequence, a method of expressing the sequence, an antibody against that protein / sequence, a kit containing such antibody / sequence.

Analysis: The subject-matter of claim falls within the scope of Section 3 (c) of the Act, as it attempts to claim an isolated Bacillus sp. IN123 (i.e. a living substance) occurring in nature (i.e. from soil as disclosed in the specification). Thus, what is claimed in the claim is treated as a discovery of a living thing occurring in nature and hence, not patentable.

In sub-section 3(i), only those methods purposely designed to free any concerned subject from an existing disease, or designed to increase its economic value or, better, the product thereof, are patentable

Further, it explains that in vivo diagnostic methods practiced on human/animal body cannot be patentable but if diagnosis is performed in vitro i.e. on tissue or fluids that have been removed from body are entitled to be patentable in light of inventive measures. Hence, diagnostic methods employing DNA primers or probes or the like that are different from naturally occurring genes/DNA sequences that exhibits modified functions  would be considered as patentable inventions.

Further, in sub-section 3(j), anything relating to a human body or its parts, including a cell, and any process employing any living part or cell is not patentable. Indian examiners believe that life forms, even if they are genetically modified, are not inventions and thus do not meet the criteria of patentability. 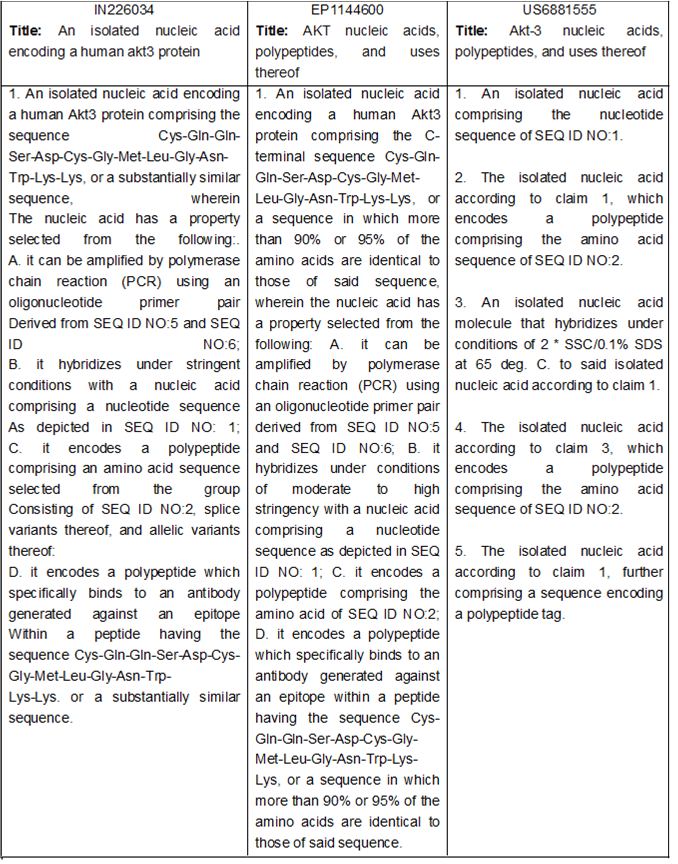 Indian (IN226034) patent first claim seem moderately wider, and includes a substantially similar sequence and also other variants of a sequence are claimed. Further there are several different nucleotide sequences that can code for more than amino acid and does not specifically pin down the actual sequences encoding the protein. Whereas US6881555 first claim is only for the specified sequence as mentioned in the ID as opposed to covering a wide range of nucleic acids as seen in European (EP1144600) and Indian (IN226034) patent where the protein sequence is used to define the nucleic acid sequence.

Patenting of genes and DNA (deoxyribonucleic acid) sequences has been at the centre of a disagreement for many years now. On one side are the exponents of gene patents, composed of pharmaceutical, biotech and agricultural bio industries, who argue that genes must be patentable to give firms the confidence to invest money and time required in the development of gene-based drugs or genetically modified crops.

More of global cooperation is required in the Biotechnology field since unlike other industries which can deliver competitive advantages through cheaper or rapid manufacturing, biotechnology companies gain monetary benefits by virtue of IP protections for their inventions. The current system of legal uncertainty, legal uncertainty, un-even patent enforcement about the patentability of DNA sequences could add to the decline in level of innovations.

Whereas on the other hand, critics of gene patents maintain that genes are not new discoveries at all, and by allowing them to be patented, control is placed in the hands of a few forestall research and restricting access to new treatments for the poor.

About the Author: Sugandhika Mehta, Patent Associate at Khurana & Khurana, Advocates and IP Attorneys and can be reached at: sugandhika@khuranaandkhurana.com.