The Appellant has obtained registration of the mark “KRISHNA” having pictorial reflection of Lord Krishna standing on a lotus flower for dairy products falling in Class-29 of the Trade Mark Act vide Trade Mark No. 597519 and has been manufacturing ghee, milk products and dairy products since 1992. The Appellant has also obtained registration of the label mark “KRISHNA” in the same class vide Trade Mark Nos 783679 and 599070. Following is the representation of the mark 597519 and 599070 respectively 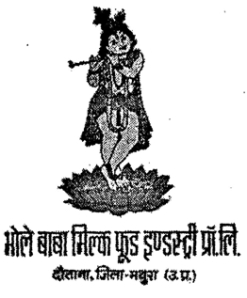 The Appellant accused Parul Food Specialties Ltd (Respondent, also a diary products manufacturer), of infringing on its trademark “Krishna” The Respondent were selling ghee under the mark “PARUL’S LORD KRISHNA”, “Parul’s” and “Lord” having a font so small that only the word “KRISHNA” catches the eye due to its prominence. The Appellant further asserted that the word “KRISHNA” has become a “well known” within the meaning of Section 2(zg) of Trade Marks Act and has acquired secondary distinctiveness (as evidenced from their sales figures).

On January 19, 2011, the Single Judge, Justice Rajiv Shakhdar refused to give exclusive trademark rights of the word “Krishna” and declined to grant injunctive relief to stop the Respondent from using mark “Krishna”, but directed the Respondent to change the font size and to print the words “PARUL’S LORD” with the same prominence as the word “KRISHNA” so that it would not be confused with the products of the appellants.

The Appellant thereon appealed to the Division Bench, consisting of Justice Pradeep Nandrajog and Justice Sunil Gaur. The division bench upheld  the single-judge bench’s order against Bhola Baba’s plea and said: “We are in agreement with the view taken by the learned single judge not only for the reasons given by the learned single judge but the additional reason, as in the instant case, a deity may be associated with a particular kind of goods.  It is common knowledge that Lord Krishna, as a child, was known for his love of milk and butter and thus Lord Krishna is closely linked with milk and butter and this would certainly dilute a proprietary claim projected by any person, in relation to Krishna with dairy products”.

The Division bench further highlighted that the registration obtained by the Appellant is not per-se to the word “KRISHNA” but is to the word “KRISHNA” written in a distinctive form. The Division bench concluded that “The distinctiveness to which the appellant can lay a claim is to what it has got registered as a whole and such registration cannot possibly give an exclusive statutory right to the appellant qua a particular word of common origin”.

Judgment of the Division Bench is tentative and the Final decision post trial would be with respect to the evidence led.

The Indian Trade Marks Registry has recently uploaded on their website a list of 86 marks that have been prohibited from grant of registration.

About the Author: Mr. Vinayak Aher, Trade Mark Attorney in Khurana & Khurana and can be reached: Trademark@khuranaandkhurana.com.