This is Part 1 of the 5 part series blog which will cover the general overview along with the background that laid foundation for the existing Sexual Harassment of Women at Workplace (Prevention, Prohibition and Redressal) Act, 2013.

The purpose of implementing the POSH Act has been to prevent and protect the women from sexual harassment being faced by them at the workplace and ensuring a safe working environment for women.  Though the Act specifically talks about aggrieved woman, however I believe that in today’s scenario an aggrieved person irrespective of the gender should be entitled to a safe working environment. According to the official data of NCRB there has been a rise in the sexual harassment complaints registered during 2016 to 2018. Around 539 complaints were received in 2016, 570 in 2017 and 965 in 2018 under the category of insult to the modesty of women in regards to Sexual Harassment of Women at Work Place[1].  In the case of Punjab And Sind Bank vs Durgesh Kuwar[2020][2] Supreme Court held that “Sexual harassment at the workplace is an affront to the fundamental rights of a woman to equality under Articles 14 and 15 and her right to dignified life under Article 21 of the Constitution as well as her right to practice any profession or to carry on any trade, occupation or business”. Thus it is the duty of the employer to provide a working environment which is safe and free from sexual harassment. 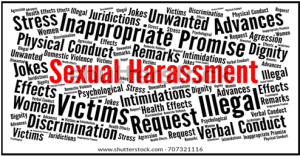 The POSH Act has its foundations in the Vishaka Guidelines, and establishes a mechanism for effectively dealing with the complaints related to the workplace sexual harassment. Vishaka and others v State of Rajasthan [1997][3] is a case which deals with the evil of Sexual Harassment of a woman at her workplace. It is a landmark judgment in the history of sexual harassment which was decided by the Hon’ble Supreme Court.

Bhanwari Devi, a social worker was engaged in a programme launched by the Government of Rajasthan to curb the evil of child marriage. She along with the District Women’s Development Agency (DWDA) took up a task to educate and convince local people on stopping child marriage. The villagers were in support of child marriage. Bhanwari Devi tried to convince Ram Karan Gurjar’s family not to proceed with the child marriage, but her efforts went in vain and the family decided to proceed ahead with the marriage. The continuous efforts of Bhanwari Devi resulted in the sub-divisional officer along with the Deputy Superintendent of Police (DSP) going to Ram Karan Gurjar’s house and stopping the marriage. However, the marriage took place on the very next day and no police action was taken against it. The villagers concluded that that the police visits were a result of Bhanwari Devi’s actions and hence she and her family were boycotted by the villagers. She even lost her job. To seek vengeance she was gang-raped on 22nd September 1992, by Ram Karan Gujjar along with his five men. The Police tried to unnecessarily prevent her from filing the complaint as a result there was no reference of rape mentioned in the report. She was also subjected to harsh cruelty by the female police attendants. Due to absence of adequate proof all the accused managed to get acquitted.

In support of Bhanwari Devi, social activists and NGOs filed a writ petition under Article 32 in the name of ‘Vishaka’ on the grounds of violation of Articles 14, 15, 19 and 21 of The Constitution of India and the need to provide protection against sexual harassment at the workplace. The Hon’ble Supreme Court came up with guidelines called as Vishaka Guidelines in 1997.  These guidelines provided the foundation for The Sexual Harassment of Women at Workplace (Prevention, Prohibition and Redressal) Act, 2013.

The POSH Act extends to the whole of India.

It is applicable to every workplace, establishment, company or organization employing (part time, full time, interns or consultants included) irrespective of its location or nature of industry.

The POSH Act as well as the handbook created by Government of India Ministry of Women and Child Development defines workplace as “any place visited by the employee arising out of or during the course of employment, including transportation provided by the employer for undertaking such a journey. A workplace covers both the organized and un-organized sectors. It also includes all workplaces whether owned by Indian or foreign company having a place of work in India. Workplace includes government organizations, including government company, corporations and cooperative societies; private sector organizations, venture, society, trust, NGO or service providers etc., providing services which are commercial, vocational, educational, sports, professional, entertainment, industrial, health related or financial activities, including production, supply, sale, distribution or service; hospitals/nursing homes; sports Institutes/facilities;  places visited by the employee (including while on travel) including transportation provided by employer; a dwelling place or house.

The Act defines the Unorganized Sector as:

The POSH Act envisages the setting up of Internal Complaints Committee [hereinafter referred to as ICC] to hear and redress complaints pertaining to sexual harassment. The complainant may submit, in writing, the sexual harassment complaint to the ICC within 3 (three) months period from the date of incident and in case of a series of incidents, within a period of 3 (three) months from the date of last incident. Where such complaint cannot be made in writing, reasonable assistance shall be provided by the Presiding officer or any member of ICC for making the complaint in writing.

Only if requested by the complainant the ICC may take steps to settle the complaint by Conciliation. If settlement has failed or the terms of settlement arrived have not been complied, then the ICC shall proceed further with the inquiry. The principle of natural justice will be followed while conducting the inquiry and both the parties will be heard and given opportunity to make representations against the findings of the committee. While inquiring into any complaint the ICC shall have the same powers as are vested in a civil court the Code of Civil Procedure, 1908 (5 of 1908).

Upon inquiry by ICC if it is revealed that the complainant had made false allegations with malicious intent or had produced any forged or misleading document, ICC may recommend to take strict action against the complainant.

The Local Complaints Committee (hereinafter referred to as LCC) is constituted by the District Officer to receive complaints of sexual harassment from establishments where:

The jurisdiction of LCC extends to the areas of the district where it is constituted.

Prohibition of publication of complaint and inquiry proceedings

The POSH Act prohibits the publication in any manner of the contents of the complaint, identity of the aggrieved person, respondent, witnesses, information related to conciliation and inquiry proceedings, recommendations of the ICC or LCC, action taken by the employer or the District Officer etc. and person contravening the provisions shall be liable for penalty.

For non compliance with the provisions of the Act an employer may be fined with a fine which may extend to fifty thousand rupees or twice the punishment, in case of a repeat offence.  It can also lead to cancellation of his license or withdrawal, or non-renewal, or approval, or cancellation of the registration, as the case may be.

The Sexual Harassment of Women at Workplace (Prevention, Prohibition, and Redressal) Act, 2013 came into existence in 2013. It has its foundations in the Vishaka Guidelines, and establishes a mechanism for dealing with sexual harassment complaints at workplace. Even though the POSH Act has been in force since 2013, the awareness regarding the same is limited.  For effective implementation of POSH Act not only does it require to provide a safe working environment but freedom to speak fearlessly against sexual harassment and get redressal.  I believe by sensitizing employees, regularly organizing awareness sessions, conducting trainings, workshops etc a culture of mutual trust and respect will be build which will result in a positive work environment and reduction of the Sexual harassment complaints.

Part 2 of this series will discuss the constitution, tenure, powers and duties of the Complaints committee under the Sexual Harassment of Women at Workplace (Prevention, Prohibition and Redressal) Act, 2013.