IP Waiver and Its Applicability in The Contemporary Times: Part I 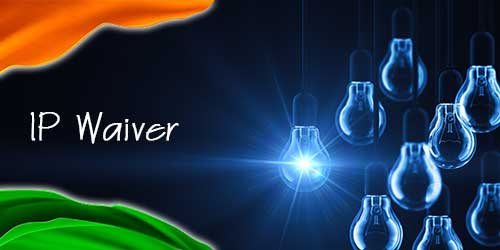 Intellectual Property Rights vest with the owner of any intellectual property. Intellectual property includes any property which comes out as a creation of the human mind. It could involve the biggest invention or any innovation done to solve a problem prevailing in society. These rights are provided to the inventor in many different forms depending on the kind of their creation such as patents, trade secrets, industrial design, etc. Battling against a pandemic for such a long period has popped up many questions and concerns in the minds of policymakers and the governments of various worst-affected countries and coming up with a solution to these issues has to be the priority. One of such concerns is with respect to the IPR waiver in order to increase vaccine production and distribution all around the globe. In this blog, we will discuss in detail the waiver of these rights, what it is, their benefits and loopholes, and their applicability in India, when an exceptional situation such as COVID-19 has arisen and the whole world is battling against it.

A patent is a kind of intellectual property right that is issued by the government to an inventor or creator for a limited and pre-specified duration. It establishes a legally enforceable right to prevent others from replicating the invention without the consent of the inventor. The inventor can grant consent by way of assignment or licensing. Patents can be divided into two types: process patents and product patents. A product patent protects the rights against a finished product, and everyone other than the patent holder can be barred from producing that product for a set amount of time, even if they employ a different procedure. A process patent allows anybody other than the patent holder to make the patented product but by altering specified manufacturing procedures. The patent system helps stimulate the flow of scientific and technical information that can be used by other innovators in the field by forcing the patent applicant to submit information about the invention that is later published by the patent office.

WHAT IS IPR WAIVER AND WHY IS IT NECESSARY TODAY?

As the toll of COVID-19 cases was increasing expeditiously throughout the globe, the issue of vaccine and its scarcity had to be addressed and so, waiver requests had been made repeatedly, beginning with formal proposals introduced in 2020 by some of the world’s largest developing economies including India and South Africa. The majority of production is currently concentrated in high-income countries, while middle-income countries are still producing through licensing or technology transfer agreements which is said to be a very cumbersome process. Waiving of IP rights would mean that the developers would have to share their know-how for the complex manufacturing process and relaxing of all the monopoly rights given to them. This waiver may make it possible to produce Covid vaccines such as those developed by Pfizer, Moderna, AstraZeneca, Novavax, Johnson & Johnson, and Bharat Biotech with “Emergency Use Authorizations” (EUA) on a greater scale in middle-income countries. Thus, a waiver is a means for overcoming the exclusive ability that a patent normally possesses. In light of the tragic proportions of this shared public health problem, there is an utmost necessity to do away with this exclusionary right for a certain period of time so that the other pharmaceutical companies are able to replicate existing vaccines and manufacture at a larger scale so that considerably more doses of vaccine will start flowing to cover the majority of the world population.

LOOPHOLES IN THIS WAIVER WITH RESPECT TO THE CURRENT PATENT REGIME

A marketing authorization from the relevant drug authorities is required before a pharmaceutical product can be placed on the market to meet the safety quality standards but if the original manufacturer successfully transferred the license to the third party, the third-party does not require a marketing authorization. Even if all the rights are waived off, this authorization would be required and it would very certainly cause a delay if the original manufacturers are unwilling to participate.

IPR WAIVER IS NOT THE SOLUTION FOR RISING PRICES

Companies must be able to earn adequate revenues from the breakthroughs they have accomplished in order to have incentives to invest in R&D. Price hike for Covid-19 vaccines is not always the result of a patent right, not when numerous vaccines compete with one another. Cost for production, storage facilities, availability of raw material in accordance with the demand is also some of the factors on which the pricing depends. Solving pricing difficulties should be the government’s responsibility as it sponsors vaccine manufacture, through corresponding agreements and by establishing enforceable regulations.

When public funding is involved in vaccine discovery, development, or the construction of manufacturing facilities, transparency is required regarding the total amount invested and the amount spent on marketing of these vaccines. Since such transparency cannot be anticipated of private enterprises, it is the responsibility of the funding authority to compel the recipient of its funds to disclose cost and price structures.

The bottlenecks in vaccine production and global distribution are mostly due to a lack of raw materials, inefficient production capacity, and, in the case of mRNA and vector vaccines, exceedingly complex producing methods. A waiver of intellectual property rights is quite unlikely to remedy these factual issues.

The probability of prices getting lower than the current price for biosimilar versions by way of waiver of intellectual property rights is quite low because of the below-mentioned reasons:

Adapting vaccines against changing Covid-19 viruses may necessitate significant future investments. However, it is debatable whether vaccine developers will be willing to do so if they are no longer able to amortize their earlier investments based on their patents. Furthermore, the currently licensed vaccines are primarily protected by such basic patents that also apply in other medical domains. Such basic patents would also have to be relinquished in order to make vaccines. This may have unintended consequences beyond the vaccinations, as it might alter investment incentives for future research and development in these areas as well.

LACK OF WILLINGNESS TO COLLABORATE

The manufacturing cycle of new mRNA and vector vaccines is quite complex, ranging from the establishment of a technological foundation to safety investigations and commercial authorization. With the increasing competition in the biopharmaceutical business, cooperation has reached an unprecedented level throughout the manufacturing, distribution, and marketing of these vaccines.  Intellectual property rights, particularly patents, are typically used as the foundation for such collaborations as they provide an assurance that promises will be honored. Even a short concession of these rights may have a negative impact on the willingness to collaborate.

FLEXIBILITY IN THE TRIPS AGREEMENT

Article 31 of the TRIPS Agreement authorizes WTO member states to provide for compulsory licenses for patents. Members states are free to incorporate this option into their national laws in order to expedite the issuance of production licenses in the event of unjustifiable license refusals by patentees. The evidence available on the steps adopted by each government proves that the international legal framework does not lack flexibility in dealing with these unprecedented circumstances.

INTERNATIONAL COMMUNITIES SHOULD COME TOGETHER

It is a matter of international solidarity to promote global equal access to Covid-19-related vaccines and medicines and this goal must be unqualifiedly supported. It cannot be accomplished only through the waiver of intellectual property rights but it is also the responsibility of the international community to discover alternate means of accomplishing it. An appropriate international legal framework is required to solve such global concerns in the future on the basis of good governance. More than 25 countries and organizations, including Germany, have called for a worldwide pandemic treaty, which is a step in the right direction. Multinational techniques, like the ACT-A or COVAX programs, are also helping to manage the epidemic in some locations. All states with the ability to contribute bear responsibilities.

This waiver would make India get easy access to all the raw material and technology which in turn will help in giving all critical patients the right treatment however, waiver alone would not suffice the purpose of overcoming this challenge but a combination of incentives, other regulations, and subsidies are also required. All the countries, policymakers, and international communities need to come together to meet the increasing demand for vaccines and other medications on a timely basis. Claims that technology transfer is difficult or time-consuming are exaggerated, as evidenced by the numerous manufacturing outsourcing and production sharing agreements that have already been implemented, such as those between BioNTech and Pfizer, Oxfarm/AstraZeneca and Novavax with the Serum Institute, and Novavax and the Canadian government.  In the present scenario, lots of controversies, arguments, and opinions by different policymakers and countries have been popping up regarding this waiver. This debate between developed countries and the LDC’s will be discussed in the next part of this blog.

Author: Ayushi – a student of Dr. DY Patil Law College, an intern at Khurana & Khurana, Advocates and IP Attorney,  in case of any queries please contact/write back to us via email vidushi@khuranaandkhurana.com