Gopikrishnan M, an intern at Khurana and Khurana, Advocates and IP Attorneys, looks at Google Inc. been accused of infringing technology related to its searching technology itself.

Yet another high-tech and high-profile patent war is on, this one involving a combined attack on the search giant’s core technology. Google is being sued for direct patent infringement in a suit filed on 31st of October, 2013 in the US District Court in Texas. Plaintiffs, Rockstar Consortium and NetStar Technologies (jointly owned by Apple, RIM/Blackberry, Ericsson, Microsoft and Sony) have accused Google Inc. of infringing a patent that is related to web search advertisement. Google has been sued in the past for bypassing user privacy, but perhaps this is the first time the search giant has been accused of infringing any technology related to its searching technology itself. Google is considered to be the pioneer in web search technology and leads the searching industry by a very high margin (as of 2013, Google owns around 80% of the web search market share).

Nortel Networks Corporation, a Canadian company, holds a granted patent US6098065, titled “Associative Search Engine”, which accepts user queries and produces search results in response. The results also contain advertisements that are related to the entered search query. The following figure in the patent illustrates how their algorithm works, providing search results as well as user targeted advertisements. 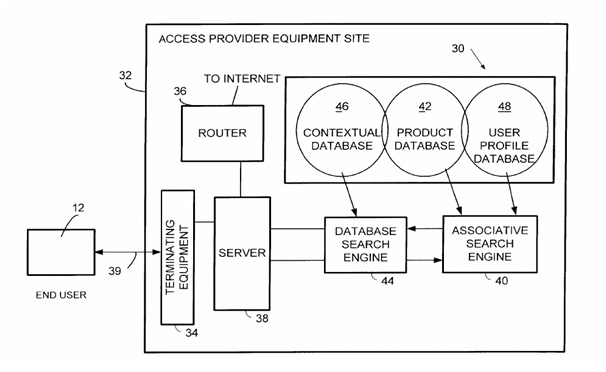 Image retrieved from the Nortel Patent

Above figure illustrates different entities that constitute the patented service. A brief understanding of the patented method is provided below:

In operation, an end user enters a query into a terminal computer, which is connected to a server. The server in turn is connected to a router which connects the computer to the Internet. Search engine can be configured to process three databases, i.e. Contextual Database, Product Database, and User Profile Database. While the Database Search Engine processes search results for the entered query, an associative search Engine searches the product (advertisement) database in relation with the search query based on the user database, which has information as to the past preferences of the user. As a result, the database search engine produces results in accordance with the user query and the associative search engine enhances it by choosing between the general search results and search results based on what the user actually wants.It also generates user targeted advertisements which will be displayed along with the search results.The search engine, in a way predicts what the user would want based on his past preferences.

In an example, consider a situation depicting practical significance of the patented method. A law student uses a search engine functioning with the inventive method being spoken about. User database would have information relating to the student including his profile, preferences, interests, among other like details. When the student searches for “Europe”, advertisements displayed would be something targeted at him, for example “Study in Europe – A career launcher website”. An investment banker, on the other hand may not get the same results when he searches for the same query.

First independent claim of US ‘065 reads as follows:

receiving, from a user, a search request including a search argument corresponding to the desired information;

searching, based upon the received search argument and user profile data, a database of information to generate a search result; and

providing the search results to the user

More information about the same and how Google AdWords works can be found at Google’s AdWords web page.

Fight for the Nortel Patents and the Subsequent Law Suits

When the Canadian based Nortel Corporation went bankrupt, around 6000 of their patents were auctioned. Google tried to acquire all of the patents starting their bid from $900 million dollars eventually raising them up to $4.4 billion but failed. Rockstar acquired the patents for $4.5 billion.  This was followed by Google’s acquisition of Motorola for $12.5 Billion

Now Rockstar has filed an infringement suit against Google Inc. alleging that Google has infringed their family of patents relating to ‘associative search’. They have alleged that Google already knew about the infringement and took part in the auction knowing the same.

An extract from the plaint reads as follows

“Google has infringed and continues to infringe the ‘065 patent by its manufacture, use, sale, importation, and/or offer for sale of systems, methods, products, and processes for matching search terms with relevant advertising and/or information based on those search terms and other user data, including but not limited to Google’s process of receiving search requests from a user, using its search engine to generate search results based at least in part on the search request, selecting  —through Google’s AdWords and/or any other products, methods, systems, or services Google uses to store and choose relevant advertising — a relevant advertisement based on the search request and/or user data, and providing the search results together with the particular advertisement to the user; and additionally Google’s systems, methods,  products, processes of using other user  data aside from the search request to help select the search result and/or advertisement; and additionally and alternatively its contributing to and inducement of others to manufacture, use, sell, import, and/or offer for sale infringing systems, methods, products, and processes in the manners described above. Google is liable for its infringement of the ‘065 patent pursuant to 35 U.S.C. § 271”

Plaintiffs here have accused Google of infringing their patents submitting that they own the IP and technology used by Google to sell advertisements, which overlaps with their ‘065 patent and hence according to 35 U.S.C. § 271, they are liable of patent infringement. The plaintiffs Rockstar consortium have filed suits against Google for infringing 7 patents all relating to the same family. The other patents are US 7,236,969; 7,69,245; 7,672,970; 7,895,178; 7,895,183 and 7,933,883. Moreover they have specifically mentioned, that Google despite losing an attempt to acquire the patent-in-suit(i.e. all the above 7 patents) at the auction, infringed and continues to infringe the patents-in-suit. The plaintiffs have accused Google of willful infringement and have asked for enhanced damages of past and future loses under 35 U.S.C. § 284 and attorney charges for prosecution under 35 U.S.C. § 285.

A general non-technical reading into Google’s technology shows that its concept is similar to ‘065 patent. But the page ranking and ad ranking algorithms used by them are very different and way more complex and efficient. Google’s desperate effort to acquire Nortel’s patents and their subsequent accession of Motorola Mobility shows how critical it was for them to have access to the technology. Plaintiffs have pointed out the same in their plaint, leading to a situation wherein Google might have a tough time defending themselves in this face off. Another interesting development is the introduction of Patent Litigation Integrity Act by the US Congress (an anti trolling law which is heavily backed by Google), which protects active inventors and innovators against patent trolls. Google may even defend the case using the provisions of this act. With all these developments in progress, it will be interesting to see how this lawsuit turns out.